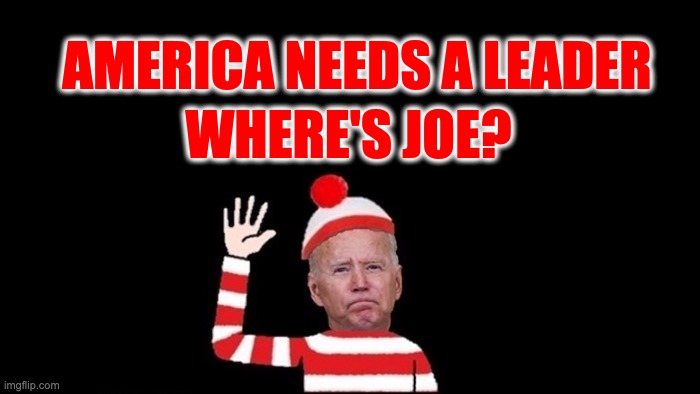 The purpose of a politician is to be a leader. A politician has to lead. Otherwise, he’s just a follower:  Alan Greenspan

A big round of applause to all the operatives on the left — media, corporate, activists, etcetera — who coordinated to ‘fortify’ the election to help unleash this screw-up of an administration on America.  Afghanistan falls Joe vacations

A month ago, Biden scoffed at any suggestion that helicopters would be rescuing Americans from embassies in Kabul. Now, there’s footage of exactly that. The Taliban is declaring victory in Afghanistan. They claim to have won their war with America. The Afghan president has fled the country, and mujahadeen have seized a mountain of American military equipment in the process… including helicopters and drones.

Joe WANTS to blame Trump. But General Petraeus is laying the blame squarely at Biden’s feet.

‘This is an enormous national security setback and it is on the verge of getting much worse unless we decide to take really significant action,’ Petraeus told WABC Radio in a recent interview.

“The outcome, whether it is the Taliban taking over the country or it’s the kind of civil war that we saw in the wake of the collapse of the post-Soviet government, there are no good outcomes here,” Petraeus said. “In fact, there is nothing more than horrible outcomes unless we are willing to acknowledge that this is not going as more optimistic projections laid out and take stock.”

Even Joint Chiefs of Staff Milley looked up from whichever book on understanding White Rage he was reading long enough to admit that the fall of Afghanistan to the Taliban makes the situation considerably less safe here at home.

JOINT Chiefs of Staff chair Mark Milley warned of an increased threat of terror attacks on US soil after Afghanistan fell to the Taliban on Sunday, according to a new report.

Milley told a bipartisan group of Senators on a call earlier today that the Islamist outfit captured the country far quicker than President Joe Biden and other top military leaders had anticipated, Axios reported.

…As a result, Milley warned that a previous assessment of how soon terrorist groups will likely reemerge in the nation will now speed up due to the events of the last week.

The ominous warning is of incredible significance because protecting the US against terrorist threats on domestic soil was the original reason for engaging in the 20-year conflict to begin with.

Far quicker than they had anticipated? So, this was an expected outcome, they just thought it will take longer?

At CNN Jake Tapper knew who to blame:

Jake Tapper: We are “watching a tragic foreign policy disaster unfold before our eyes…The rapid crumbling of [Afghanistan] has caught the Biden White House flat footed.”

“It seems shocking that President Biden could’ve been so wrong” pic.twitter.com/Vw3Vr6VkNq

Not too shocking, after all, last August Biden’s buddy Barack Obama said, “Don’t underestimate Joe’s ability to f**k things up.”

Well, this is going to make for an awkward 20th Anniversary of 9/11. And if that wouldn’t, this will…

A Taliban commander claimed he spent eight years in Guantanamo Bay in a triumphant speech from inside the Presidential Palace in Kabul as the militants declared an Islamic state of Afghanistan after the country’s president joined thousands of Afghan nationals in a mass exodus.

Taliban fighters marched into the ancient palace on Sunday and demanded a ‘peaceful transfer of power’ as the capital city descended into chaos, with US helicopters evacuating diplomats from the embassy in scenes echoing the 1975 Fall of Saigon which followed the Vietnam War.

Eight years in Gitmo, huh? Wonder who was in office when this guy was let out.

Meanwhile, where is Joe Biden while all this is going down? 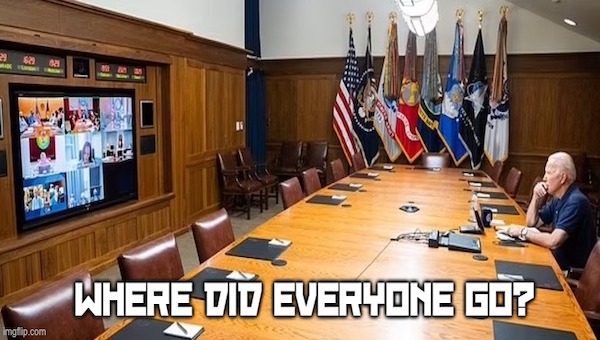 If this were Trump (or any other Republican), the press would already be running the comparisons to Dubya and Katrina. If it weren’t bad enough that there are already parallels to the fall of Saigon… now we have him hunkered down in a bunker while the fit hits the shan.

Come to think of it, didn’t Joe take some dishonest swipes at Trump for ‘hiding’ when the White House was literally under siege by ‘protesters’ in June 2020 who came perilously close to breaching the perimeter and leaving security with some hard decisions what degree