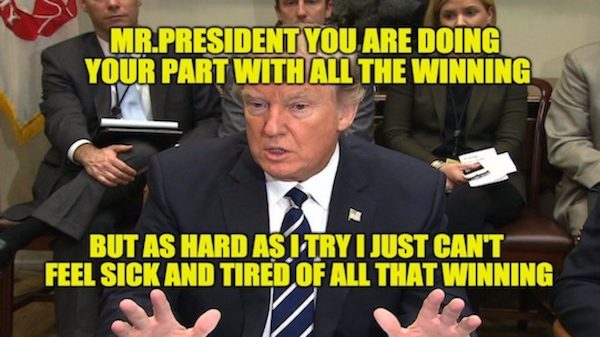 Despite the MSM’s blindness to the Trump Administration’s successes, business leaders and American citizens see the president’s strategies of easing regulations and cutting taxes as lighting a fire under an economy that has been stagnant since for the past eight plus years. And while he hasn’t gotten to the taxes part the fact that the President has already kept many of his campaign promises including eliminating unnecessary business killing regulation. The dropping of the regulations has already created an optimism that has begun to spur hiring. For the second straight month it is reflected in the jobs numbers.

Over the President’s first 2+ months in office he has methodically gone about undoing many of President Obama Executive Orders and administrative actions. He has been unraveling regulations, cutting spending, and promoting a positive business environment even as he’s been pushing the GOP-led legislature to begin the hard work of cutting taxes, regulations, and spending at the legislative level. Most recently was the elimination of Obama’s Clean Power Plan which besides hurting the coal industry was seen as depressing any industry that uses electricity.

All of that hard work and all of the good will that President Trump is building in the business community is paying off. For the second month in a row the American job market exploded with new jobs.

“Job growth is off to a strong start in 2017. The gains are broad-based but most notable in the goods producing side of the economy including construction, manufacturing and mining.”

The year’s fast start for job creation showed no signs of letting up in March as private payrolls saw another big boost, according to a report Wednesday.

Companies added 263,000 jobs for the month, ADP and Moody’s Analytics said. That was well above the 185,000 expected from economists surveyed by Reuters and also better than the 245,000 reported for February…

In addition to the big gain on the headline number, the month also continued a trend away from services-oriented positions dominating job creation. Goods-producing firms contributed 82,000 to the total, as construction led the way with 49,000 new jobs.

The news about another spectacular month of jobs growth immediately had an impact on the stock market as well, driving stock prices up, up, up.

The S&P 500 financial sector rose 0.84 percent, leading the seven gainers among the 11 major S&P sectors. The financial index’s gains were led by banks, which start reporting first-quarter results next week.