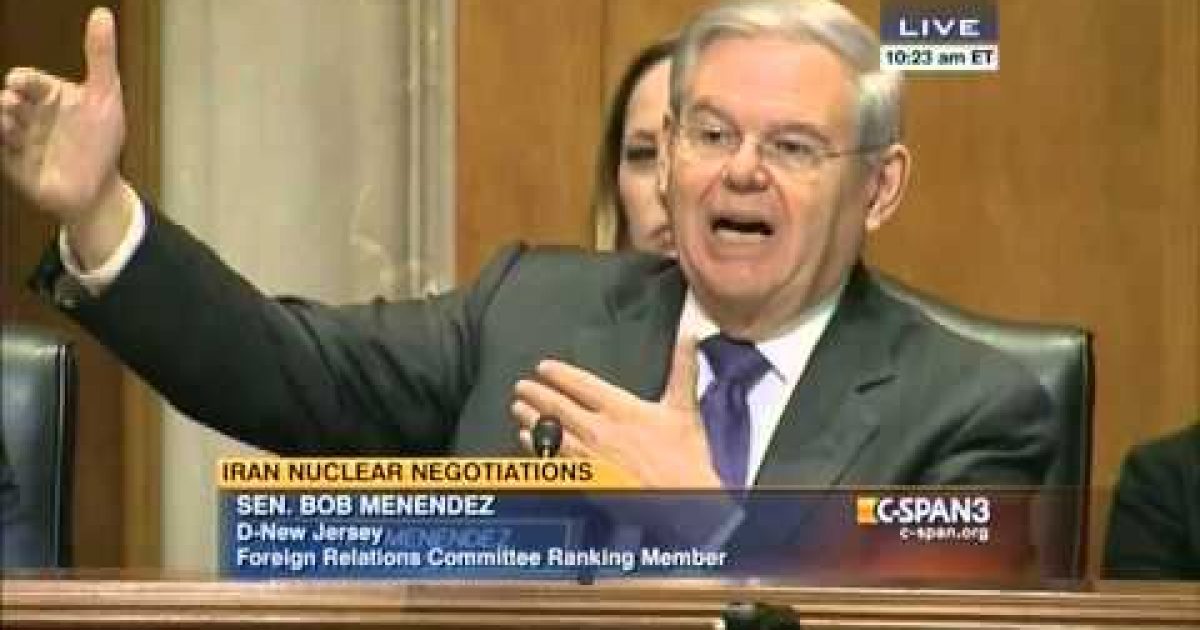 The “money line” picked up by the media was not the real story. The reports from Wednesday’s Senate Foreign Relations Committee focused on Senator Bob Menendez (D-NJ) saying, “The more I hear from the administration and its quotes, the more it sounds like talking points that come straight out of Tehran.” The real story happened almost five minutes later when Deputy Secretary of State Anthony Blinken admitted the White House is no longer negotiating stop Iran from breaking out to nuclear weapons, only to get a better “alarm” if the rogue nation tries to make the leap.

The other bill would increase the sanctions on Iran in July 2015 if a framework agreement is not made by the March 2015 deadline, however Obama (or any President) has the right to waive or delay the sanctions.

In the video below Senator Menendez questions Anthony Blinken about both issues. Starting with the “talking points from Tehran” quote, through the first four minutes and forty-five seconds Menendez tears apart the administration’s logic in opposing both bills. That’s when he gets to the new purpose of the negotiations and the administration no longer trying to kill Iran’s nuclear program just to get a more advanced warning. Menendez follows up by explaining the way the negotiations will net out, Obama is simply dumping the Iranian nuclear issue on the next president.

Menendez: So let me ask you this, isn’t it true that even the deal that you are striving towards –is not to eliminate any Iranian breakout capability, but to constrain the time in which you’ll get the notice of such breakout capability. Is that a fair statement, yes or no?

Blinken: Yes, it is.

Menendez: Okay, so we’re not eliminating Iran’s ability to break out. We’re just getting alarm bells, and the question is how long are we going to get those alarm bells for? Now, isn’t it also true that the administration cannot lift sanctions, that it can only waive them under the present law, yes or no?

Menendez: So now the Iranians are going to make a deal in which this president may waive sanctions but the next president of the United States, whoever that may be, may decide you know what, this is not in our interests because it’s only going to give us a limited period of time and they’re going to go ahead and say sorry we’re not waiving the sanctions anymore. In that the Iranians are willing to make the hard decisions that they agreed to make that they have been unwilling to make for 18 months because I heard this movie’s been played before. Right? 20 years. Last June we heard from the president just give me time. That was seven months ago. Right? Now we’re reliving it again. And so the bottom line is, that we are going to do all of this and ultimately be in a position in which if they don’t make a deal, we’re exactly where we are at, but with no immediate consequences to them. Their breakout time is shorter than the time it will take to create new sanctions. And now you’re telling me the chairman, based upon your responses, that you don’t want us to even — the Iranians have made it very clear that their parliament has to vote on this issue. Why is it possible that Tehran will treat its parliament better than the administration in the greatest democracy is willing to its congress? It’s — it just boggles my imagination. So, Mr. Chairman, I’ll look forward to looking at your legislation, and I have suggested to you in our previous conversations some ways in which I think it might be made even stronger.

This hearing was conducted at the same time as Speaker Boehner’s
announcement about Netanyahu speaking before a joint session of Congress
on February 11. The word is that Obama is angry at Boehner for the invite, but he is even angrier at Bibi because he believes the Prime Minister should have given the heads up to the President as soon as he first heard from the speaker, which he probably what he should have done if he had any hopes of repairing his relationship with the President.

But based on Obama’s pro-Muslim view of the Middle East and his softness on fighting terrorism, there was probably little hope for a reconciliation between the two.

When one listens the admission Blinken makes at the 4:45 mark of the video below, it seems for Bibi, the February 11th congressional speech is not a slap at Obama, rather it is a critical attempt to prevent this President from exposing Israel (and the U.S.) to the existential threat of a nuclear Iran so he can have a foreign policy “win” for his legacy.