More Congressmen Admit The FBI Broke their Own Rules 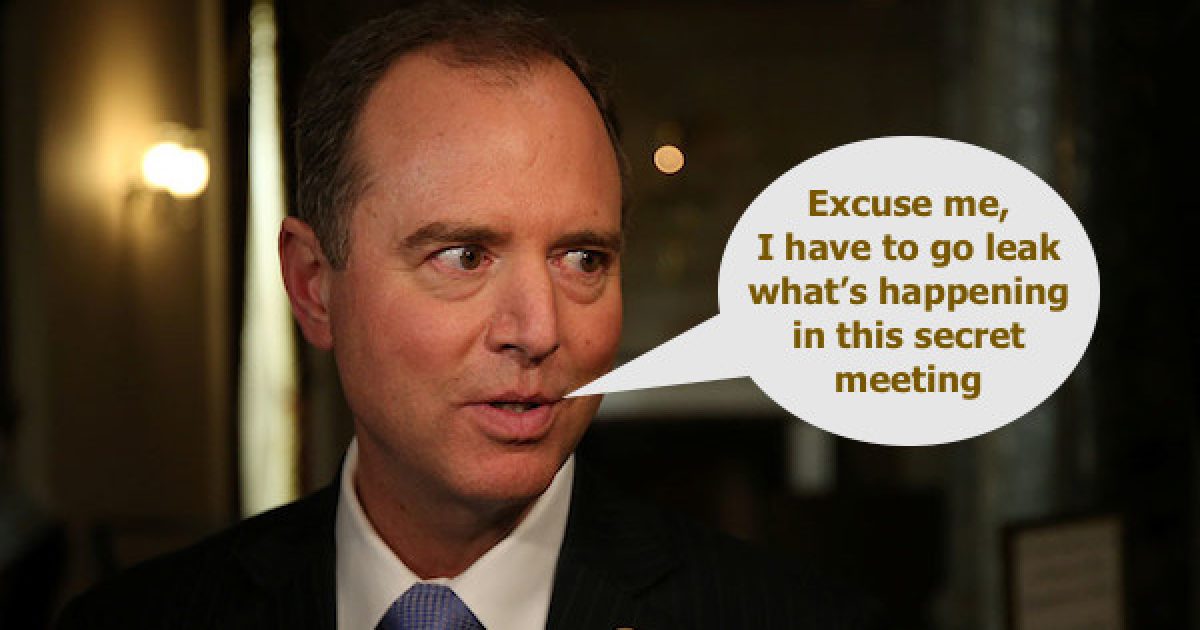 On Tuesday, several Congressmen appeared before the national media and what they had to say was pretty interesting. Rep. Devin Nunes (R-CA), and Rep. Jim Jordan (R-OH) both made appearances on Fox News and said unequivocally that the FBI broke their own rules when they applied for a FISA warrant against Carter Page. Meanwhile, Adam Schiff (D-CA) appeared on CNN and when he was asked if the FBI acted improperly, he REFUSED to answer the question.

The answer is obvious.

Congressional Republicans KNOW that the FISA warrant application will eventually see the light of day and it will prove that the FBI acted improperly in an effort to spy on the Trump campaign. Congressional Democrats know the same thing, which is why they are doing their very best to change the conversation from FBI malfeasance, and to refocus the media on Robert Mueller’s ongoing investigation.

In effect, the Democrats are willing to let the FBI’s crimes (violating the 4th Amendment rights of American citizens) be swept under the rug… if it means undermining the Trump administration and winning some political points.

Understanding that should shock all Americans. This means that the Democrats care more for their personal power than they do the defense of the Constitution, the integrity of our government, or the good of our nation.

Rep. Jordan goes into more detail about how the FBI misled the FISA court:

Look, more important to me is, did top people at the FBI engage in behavior they’re not supposed to engage in, in the United States of America? Namely, did they take a disproven, salacious document and make that the basis to get a warrant, a secret warrant at a secret court on a fellow American citizen?

And it sure looks like they did. And when they did that process, it looks like they didn’t tell the court pertinent, important information, like who paid for it, like the fact that they discontinued their relationship with Christopher Steele, the author of that document.

So, to me, that is more important or most important when you think about fundamental liberties we’re supposed to enjoy in the United States of America…

What I do know is this. To date, not one bit of evidence to show any type of coordination between the Trump campaign and Russia to influence the election. But we know, just as sure as you and I are talking, that there was — the Clinton campaign paid the law firm who paid Fusion, who paid Christopher Steele, who paid Russians to do what?

Get information to influence the election. And what did we also learn? His work product, Christopher Steele’s work product was taken to a secret court to get a secret warrant to spy on a fellow American. And we know that work product was salacious and unverified, Jim Comey’s words, not mine.

That is a problem. So, we know all of that. Mr. Mueller, if he is going to continue his investigation, so be it. What I’m focused on is getting the truth and reforming this FISA process that I think was terribly abused.

Rep. Devin Nunes concurred with Jordan and actually went even further. Nunes told Fox News’ Neil Cavuto that a counterintelligence probe should have been opened up against the Clinton team once it was discovered that they had been working so closely with foreign agents to undermine the Trump campaign.

It seems like the counterintelligence investigation should’ve been opened up against the Hillary campaign when they got ahold of the dossier. But that didn’t happen, either…

I think the conflict that you’re describing, which no one on the left seems to care about or the mainstream media, is that political dirt was used by the FBI, and they knew it was political dirt, to open a counterintelligence investigation into the other campaign.

.@DevinNunes: “It seems like the counter intelligence investigation should’ve been opened up against the Hillary campaign when they got ahold of the dossier. But that didn’t happen, either.” #Hannity pic.twitter.com/zJuEu7xPwM

Nunes also added that the media should be ashamed of themselves for ignoring the obvious malfeasance at the FBI and covering the revelations in such a biased manner.

Meanwhile, over at CNN, Adam Schiff was busy mocking the President and ignoring questions about the FBI’s bad behavior. Schiff, also reminded the world that there was a lot of other bad behavior going on in the intelligence community (namely the illegal unmasking of names), but he attempted to simply shrug that off as well.

CNN’s Sciutto: But did the judge know that this dossier was specifically backed up by Clinton campaign money? That the DNC was involved? Or did they just know — did the judges know generally that there was a political source to this document or political backing, rather?

Schiff: You know, I can’t get into the specifics until they’re declassified by the committee. But I think that the FBI certainly gave important information about bias to the FISA court. There are a lot of reasons why the names — the specific names of U.S. persons, or U.S. organizations, are not used. And we had testimony about this in the committee.

Just disgusting. Adam Shiff is the lowest form of life in politics, he’s practically the 2nd coming of Harry Reid.

In a Lid exclusive I am told that the below is the first page of Adam Schiff’s response to the Nunes memo: 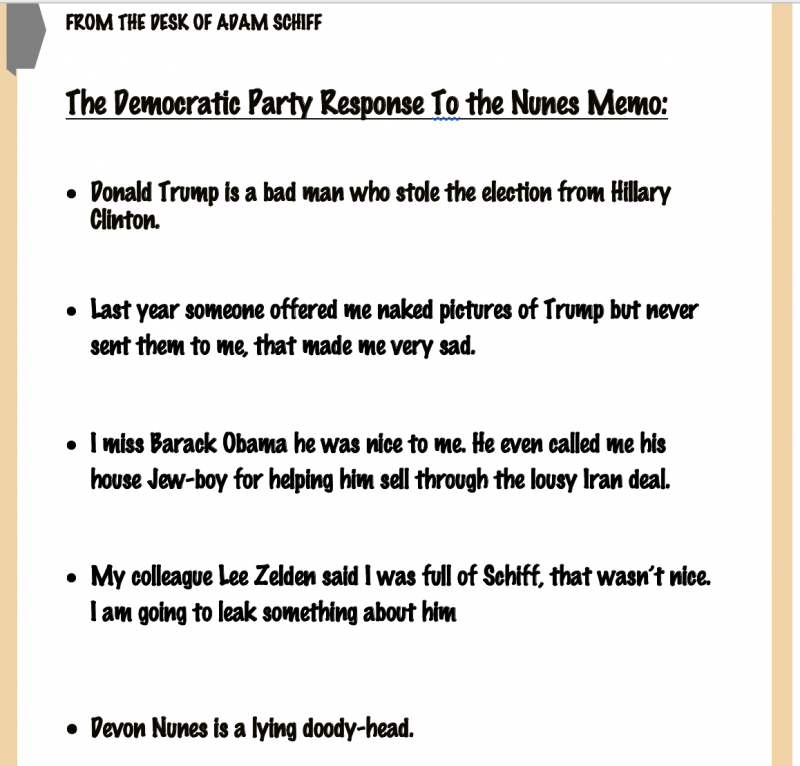