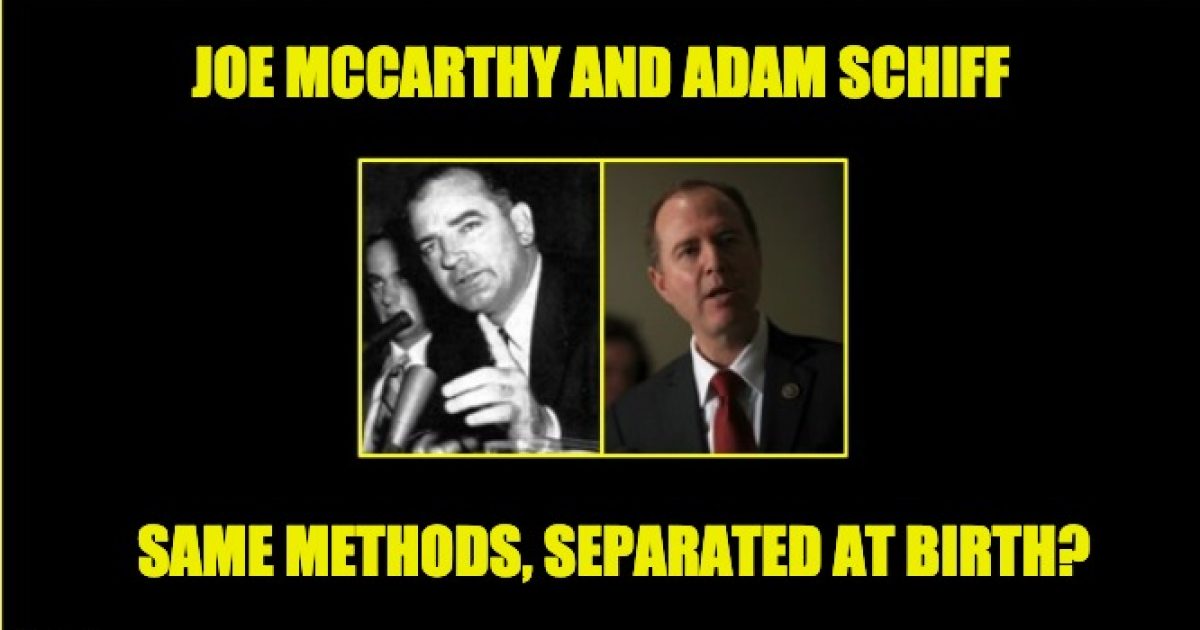 Congressman Adam Schiff (D-CA) was justifiably called out Thursday morning by every Republican on the House Intelligence Committee he chairs for his two years of lying about “conspiracy” involving President Trump. All the Republicans on the committee signed a scathing letter to Schiff saying they had no confidence in the lying Congressman and demanding that he resign as Chairman.

The letter said, “Your actions both past and present are incompatible with your duty as Chairman of this Committee, which alone in the House of Representatives has the obligation and authority to provide effective oversight of the U.S. intelligence community. As such, we have no faith in your ability to discharge your duties in a manner consistent with your Constitutional responsibility and urge your immediate resignation as Chairman of this Committee.”

GOP Letter to Schiff by on Scribd

Schiff has been the face of the Democratic Party Russia hoax, accusing the president of collusion and leaking secret committee information to the press. Schiff kept saying he had confidential information proving the case against the president but never revealed it even when after the Mueller report was finished.  Schiff’s rantings were reminiscent of Sen, Joseph McCarthy empty charge “I have here in my hand a list of 205 that were made known to the Secretary of State as being members of the Communist Party and who nevertheless are still working and shaping policy in the State Department.”

Near the start of the hearing Rep. Mike Conway (R-Tx), a senior member of the panel told Schiff his claims of collusion between President Trump during the Mueller investigation and afterward undermine his ability to act as chairman of the committee. He also accused Schiff of leaking information from the panel to the news media and helping spread the narrative that the president colluded with the Russians in order to win the White House in 2016.“Despite those findings you continue to proclaim to the media there is significant evidence of collusion,” Conaway added.

Reacting to the demand to get the heck out of the Chairman’s seat. Schiff offered a defense of his actions by telling Republicans that they “might think it’s okay” and listed a list of charges against the campaign, including that Donald Trump, Jr. Trump Tower meeting. His entire monolog of charges was already public knowledge. He did not provide that secret evidence he still says he has. Most of Schiff’s charges took incidents and described him according to his own interpretations. A few on the Schiff list happened during the transition, so they weren’t election related.

It was Pulitzer Prize-winning political cartoonist who described Adam Schiff the best:

Schiff and the Democrats refuse to move on despite that Mueller cleared him of colluding with the Russkies, and AG Barr, Deputy AG Rosenstein, and the DOJ Office of Legal Counsel exonerated the President of obstruction of justice.

But a new Rasmussen poll released Thursday morning shows that 61 percent of likely voters think Congress should “move on to other issues” now that the Mueller report has been delivered. But the Democrats and especially Barack Obama’s butt boy Adam Schiff will continue to focus on Russiagate. At her weekly press conference on Thursday, Pelosi made the argument that Trump was evil because he didn’t report any outreach from the Russian Govt. the FBI forgetting the fact that during the campaign, people who spoke to Russians didn’t know they were part of Putin’s government.

Watch the initial confrontation on the video below: