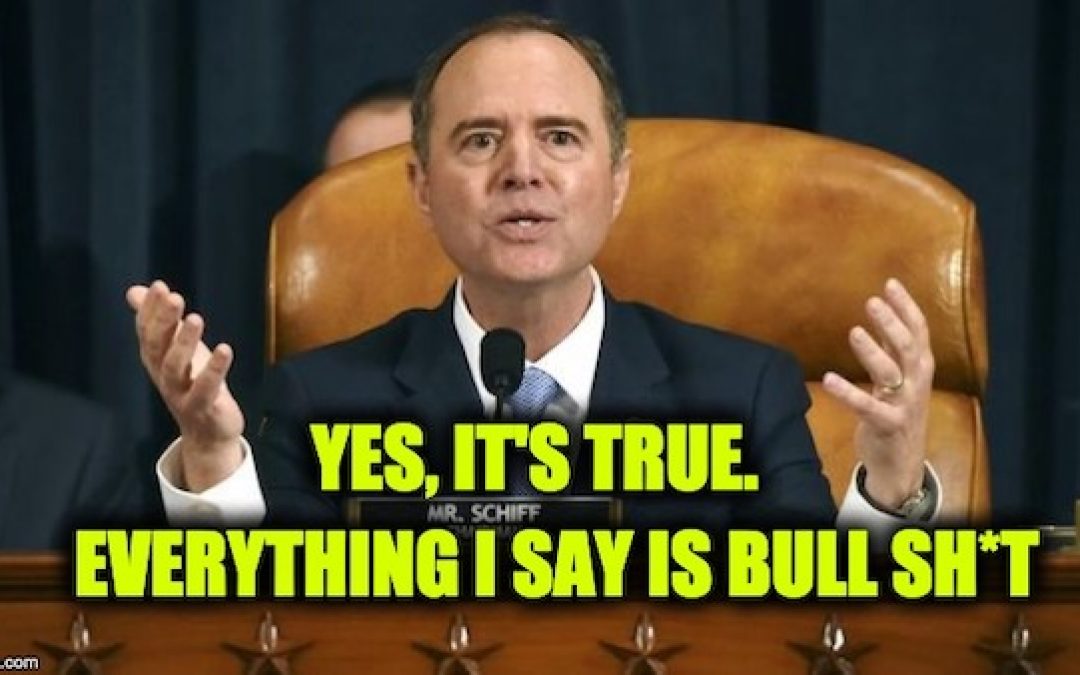 At the height of the Spygate scandal, the bug-eyed bull-sh**ting bloviating barrister of Burbank [Rep. Adam Schiff]; kept repeating the same lie:

Schiff said there is evidence — heard by the committee behind closed doors —that he can’t talk about publicly because it remains classified. But he said there is plenty of evidence of collusion that has been reported publicly,

Shakespeare would describe Schiff as, “A most notable coward, an infinite and endless liar, an hourly promise-breaker, the owner of no one good quality.”

Despite his failed first attempt, slanderous Schiff is using the same strategy again.

Known liar and sitting Congressman Adam Schiff (D-CA) is one of the desperate Dems that has been giddily pushing the ridiculous January 6 “insurrection narrative. The Democrat talking point is that Trump used “The Big Lie” that the 2020 election was stolen to damage Republicans before the midterms.

Here he is trying to drum up ratings for the January 6th Prime Time Spectacular (a.k.a. The Partisan Show Trials) when viewership of the first night of the committee hearing was lackluster at best.

Our first hearing was just a sample of the evidence we’ve gathered.

Tomorrow, we’ll tell the story of how Trump knowingly propagated his Big Lie.

Then used that lie to pressure legislators, the Vice President, and, ultimately, summon the mob.

The public deserves to know. pic.twitter.com/uQZ6cgrbZy

It’s shameless partisanship that is stoking the fires of division by claiming that the riot on January 6, 2021, was the “darkest day in U.S. democracy since the Civil War.” Perhaps he skipped school the day they discussed WWII in social studies. Maybe his paper boy accidentally skipped his house on 9/11/01, so he has no idea what happened. Most probably, Schiff’s claim is a case of intentional hyperbole.

According to Democrats, Republican lawmakers who dared to question the way that Democrat governors and state legislatures suddenly changed the election rules “because of the pandemic” in ways that even the New York Times had said were ripe for fraud are a “threat to democracy,” but Stacey Abrams and Hillary Clinton claiming that their elections were “stolen” are brave truth-tellers to this day.

Schiff went on CNN’s State of the Union on Sunday and told host Dana Bash that he has evidence that former President Donald Trump was “involved” with what happened on January 6, 2021, but he doesn’t want to “get ahead of the hearing.

Rep. Adam Schiff tells Dana Bash that he "has evidence" of Trump's involvement on January 6th, but he can't reveal it because he doesn't "want to get ahead of the hearing." pic.twitter.com/mAcVL6LW5R

” Gee, where have we heard that before?

Schiff is kind of like the boy who cried wolf… but only if that boy lived on a planet where wolves didn’t exist.

Independent journalist Aaron Maté posted a video of Schiff on MSNBC’s “Meet The Press” from March 2017, where he tells host Chuck Todd that he has seen evidence that is “more than circumstantial” of Trump-Russia collusion to subvert the 2016 election… he just couldn’t provide it at the time.

Just because every investigation found that statement to be a lie doesn’t mean it isn’t true right? it does mean he’s lying? Never mind!

WOW, Even Chuck Todd, who is almost as big a liar as Schiff, questioned Schiff’s opinion.

Schiff couldn’t provide the evidence because we know it did not exist. Everything was tenuous, and even the “smoking gun” of the Trump org’s link to AlfaBank was a Hillary-approved campaign product peddled to the FBI via her lawyer Michael Sussmann.

But we all know that Schiff has a reputation for this sort of thing. Let’s be honest, Adam Schiff’s claims are as nutty as a porta-potty on the last day of a peanut convention.

Where is this "very powerful" evidence, Adam Schiff? pic.twitter.com/xPmL6SJrIl

This guy is unbelievable.

Pencil-neck Schiff is this era’s Joseph McCarthy, except he doesn’t even have any actual communist traitors like the Rosenbergs or Alger Hiss to point to.

He’s just waving around a blank piece of paper — no matter how damaging this partisan witch hunt is to the already heated political climate — in an effort of shameless self-promotion in the hopes of getting more air time on CNN and MSNBC.

The Dem-sympathetic Regime Media continue to have this guy on to spread ridiculous inanities that will prove to be duds in a few months.

Why do they continue to do it?

Because they’re shameless rating grabbers who have fed their #Resistance audience a steady diet of this B.S. and can’t wean them off of it without having their rating tank even lower than they are now.

It’s just another example of the broken media landscape that continues to fuel division in the country.

It’s time for these left-wing outlets to stop giving proven liar Congressman Adam Schiff and his ilk free air time for his propaganda war on his political opposition.