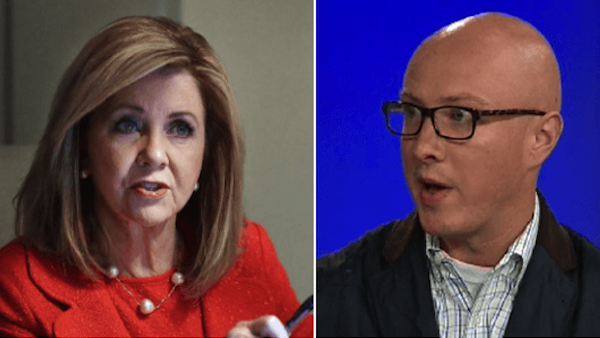 A former field director for the Democratic National Committee (DNC) blasted Republican Senator Marsha Blackburn as “inbred racist trash.” Adam Parkhomenko, who actually ran as Vice-Chair of the DNC in 2016 and was a former Hillary Clinton campaign aide, took aim at Blackburn (R-TN) over her criticism of the Black Lives Matter movement.

“The life of every African American matters. But Black Lives Matter is a 501 (c)(3) organization run by ‘trained Marxists,’” she tweeted. “We cannot allow our great country to be destroyed under the pretense of social justice.”

Parkhomenko responded in a fashion you’d expect from someone with no intellectual stability whatsoever.

You are inbred racist trash. Please fuck off

There is so much to unpack in Parkhomenko’s tweet – from the clearly demonstrated mental instability to the obvious Napoleon complex he is suffering from – it is ridiculous.

We have the ‘people from Tennessee are inbred’ angle.

Not to mention projection in calling somebody else “trash.”

And of course, there is the blatant misogyny that we’re certain will cause Democrats everywhere to stand up and denounce. Surely the media will cover his words 24/7, just as they would if a Trump associate said something similar to a female lawmaker. And likewise, Twitter will suspend his account for behavior which violates their standards. Just kidding – we know they don’t care. Blackburn is a Republican and as such, she deserves such a vile attack. At least that’s how Twitter thinks.

Hey @Twitter @DNC @TheDemocrats — are you good with this kind of foul and disrespectful behavior from one of your leaders–and #VERIFIED accounts? Don't dare ever try to lecture us again on high standards. pic.twitter.com/x9t3OJuTQs

Class with a capital “k.”

He mocked the President’s son, Barron Trump, for not being in attendance at a World Series game last year. “Imagine being a kid and your dad takes Lindsey Graham to the World Series instead of you,” he teased.

In April of 2019, he mocked Senate Majority Leader Mitch McConnell for falling down knowing full-well he had injuries suffered from complications due to childhood polio.

Yesterday I posted this new found footage of Mitch McConnell standing up for America. 368,000 views overnight. Mitch McConnell does not want you to let this video get up to 1,000,000 views. pic.twitter.com/PZTGBGOrjt

Parkhomenko is the type of individual the left constantly puts up as an important player in their party – classless and insecure.