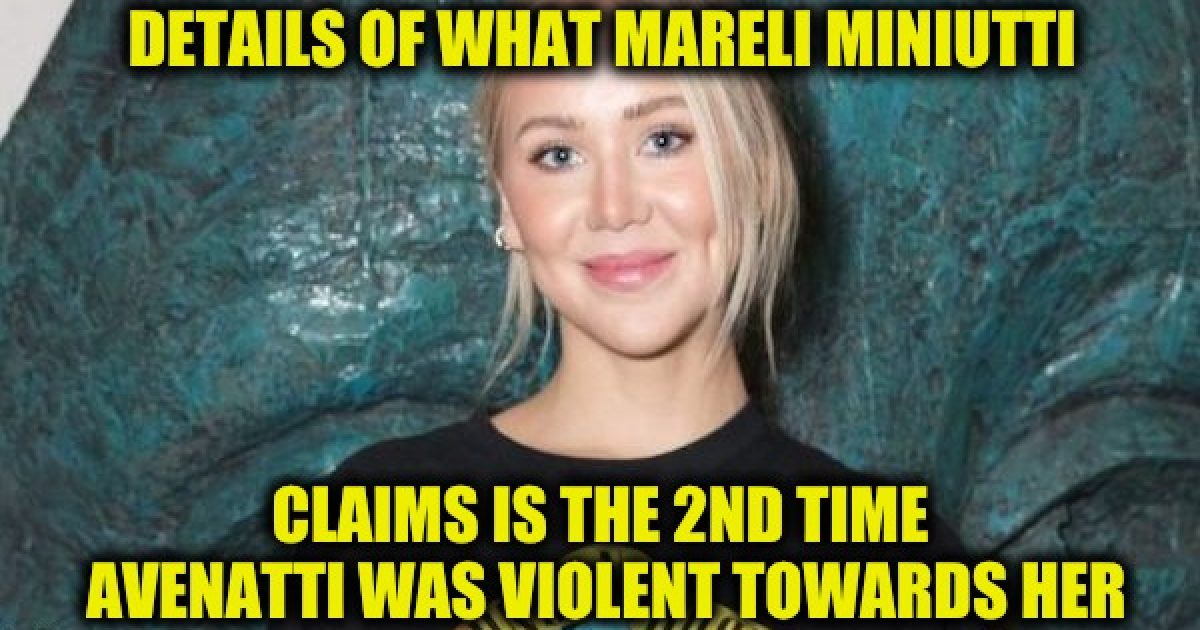 The details of the attack laid out in court documents filed by Miniutti have leaked out and were published in The Daily Beast.

Per Ms. Miniutti Nov. 13th incident was not the first time Michael Avenatti got violent with her. She claims he also attacked her this past February when “he became angry at her after drinking and pushed her into a hallway—where she hit her head—before throwing shoes at her.”

In the documents, Miniutti states that she is “afraid that [Avenatti] may cause harm to me and harass me.” She also gave her account of the incident:

Miniutti said she left the bedroom and went to try and sleep in the guest bedroom alone.

She wrote: “[Avenatti] eventually followed me to the guest bedroom, getting very close to me in a threatening manner that made me afraid. [He] continued to call me names, and call me an ‘ungrateful bitch.’”

“[Avenatti] began forcefully hitting me in the face with pillows from the bed. He then said words to the effect of, ‘Do not disrespect me. You don’t get to sleep in my house tonight.’”

Miniutti said she began to text a friend on her cell phone but Avenatti allegedly “yelled” at her, grabbed the phone and screamed “this is my phone!” before putting it in his pocket.

She added: “At all times, he remained very close to me such that I was afraid for my safety. I screamed for help towards the nearby window.”

At this point, Miniutti—dressed in her underwear and a t-shirt—claims Avenatti grabbed her right arm and dragged her out of bed, along the floor of the apartment and out into the public hallway.

The actress said she “suffered scratches to the bare skin on my side and leg” and attached photos of her alleged injuries as exhibits to her court filing.

“[Avenatti] then yelled at me, grabbed me by the arm again, and pulled me back into his apartment. [He] then blocked the door with his body and prevented me from leaving the apartment by holding the door shut.”

That’s when Aveatti must have realized what he did because he begged her not to tell anyone about what happened.  “[He] repeatedly begged, “Don’t Do this Mareli, don’t involve them”

The court papers said that Miniutti went to the front desk, followed by Avenatti, and Avenatti returned her phone. She said people at the front desk called for security, who took her alone into another room to talk to her. She then called a friend, who agreed to come to pick her up, she said. “Once at her home, I saw red marks on my left side. I called the police, who arrived and took my statement,”

The next day, Nov. 14, Miniutti said she returned to the Century City apartment where staff allowed her to access Avenatti’s apartment. She locked the door and began to pack her belongings when she heard the door unlocking and Avenatti returned. She then went to the balcony and called the police and yelled at him to leave, which he did.

A short time later, she was told Avenatti had been arrested and she gave detectives another statement and left.

Mareli Miniutti claimed that Michael Avenatti “has a history of being very verbally abusive and financially controlling towards me.”

Miniutti requested her temporary restraining order application be hidden from public view. Her court filing also blindsided Avenatti, as she said she couldn’t give him notice “out of fear that more threats or violence will occur.” Her request to keep the order hidden was denied by the court.

Describing why she wanted the case kept out of the press, she wrote that Avenatti was a “nationally-known celebrity and potential presidential candidate. His arrest for domestic violence by the Los Angeles Police Department on or about November 14, 2018 made national news.” She claimed news reporters had already tried to contact her by email, phone and also had contacted friends of hers.

“I am also afraid to pursue this restraining order because the media have relentlessly been trying to find me.” She said it had made her feel “very unsafe” adding: “[Avenatti] is on friendly terms with many persons with the media. It makes me feel terrified. [He] draws media attention for almost everything he does. He is very powerful.”

When the truth and the facts are fully disclosed, including the security camera footage, I will be vindicated and a lot of people and news organizations are going to owe me an apology as well as money. Completely bogus. Let’s start with TMZ’s reporting from last week.

I want the truth to be known – all of it. The truth about the alleged incident on Tues night/Wed am, as well as the truth about TMZ’s completely false reporting about last Wed afternoon. I want it ALL disclosed. ASAP. As a result, I just authorized the release of all the video. pic.twitter.com/kMucoFTL8P