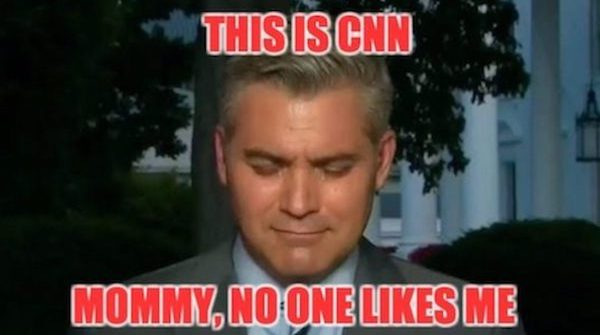 I wonder if Jim Acosta realizes that in his case it IS personal. Very few people in the administration like or respect him. He is considered by most people I know  (including liberals in the media) as the most unprofessional member of the White House press corps. And he’s proven it again. The CNN White House reporter accused President Trump of ‘xenophobia’ for pointing out the foreign origins of the coronavirus, despite saying the same thing himself weeks earlier. Acosta calls Trump racist

In an address to the nation from the Oval Office Wednesday night, the President updated Americans on what steps his administration is taking in order to blunt the spread of the disease.

Trump noted – accurately – that the coronavirus outbreak “started in China” and that the White House was embarking on “the most aggressive and comprehensive effort to confront a foreign virus in modern history.”

Acosta reported back to his equally unintelligent colleague Chris Cuomo at anti-Trump headquarters, and declared the President’s perfectly correct statements to be – you guessed it – racist!

“The other thing, Chris, that I think we should point out, at one point during the address the president referred to the Coronavirus as a quote, ‘foreign virus,’” Acosta recorded for his diary.

“That, I think, was interesting because I was talking to sources this evening, one of the points that the president wanted to make tonight, wanted to get across to Americans is that this virus did not start here…”

So distraught was Acosta, that the only explanation he could dream up is that Trump’s reference to the coronavirus as foreign and from China must be his racism seeping through.

“Now why the president would go as far as to describe it as a foreign virus, that is something we’ll also be asking questions about,” he explained.

“But it should be pointed out that Stephen Miller, who is an immigration hardliner who advises the president is one of the top domestic policy advisers and speechwriter, was a driving force in writing this speech and I think it is going to come across to a lot of Americans as smacking of xenophobia to use that kind of term in this speech.”

Advice to our readers – If you’re having a tough day, kick back, relax, and realize this: At least you’re not as embarrassing as Jim Acosta.

Not only is it idiotic to make the suggestion that pointing out origins of the coronavirus is racist – you know, the way they do with most diseases (see German measles, Ebola virus, etc.) – Acosta is proving to be a world-class hypocrite.

In a tweet just weeks earlier, Acosta reported that officials in China were taking measures “to contain the growing spread of Wuhan Coronavirus.”

@acosta is what's known as a weapons-grade moron in the biz. By his own definition, he's xenophobic… pic.twitter.com/lWwVaMGIeu

Wuhan, of course, is the province in China where the outbreak began.

President Trump was correct when, during an event in India, he called Acosta out for having “probably the worst record in the history of broadcasting.”

“Your record is so bad that you ought to be ashamed of yourself,” Trump chastised.

Jim Acosta’s entitlement and his arrogance towards news-watching Americans, combined with his misleading reports is a big factor in the once-mighty CNN’s collapse in ratings to the point where it not only trails Fox and MSNBC, who are first and second in the rankings but has collapsed to the point where it is no longer in the top ten basic cable networks (#14).

Acosta’s continuing hypocrisy and lies shows he has no shame. No shame at all.