Equal Justice Under The Law Is Ignored When The Person Has Connections---To The Democratic Party. 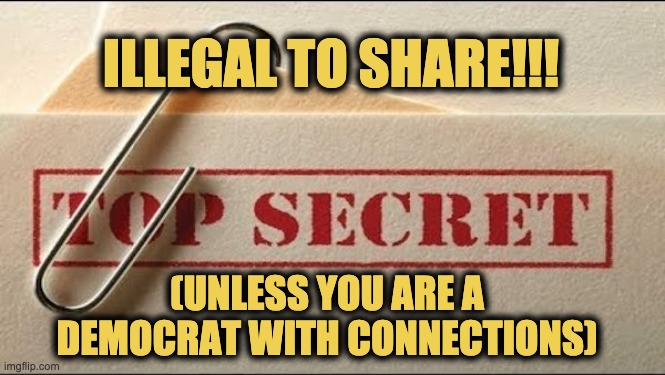 When the investigation’s subject is a relative nobody with no political connections, the hammer-fall can hit like a load of bricks.

Strangely enough, this only serves to remind us of other cases where they didn’t seem quite so interested in prosecuting wrongdoing.

Good on the DOJ for catching (to use the technical term) a sonofabitch who sold out national military secrets to a reporter.

According to court records, Daniel Everette Hale, 31, of Nashville, Tennessee, served as an enlisted airman in the U.S. Air Force from July 2009 to July 2013. After receiving language and intelligence training, Hale was assigned to work at the National Security Agency (NSA) and deployed to Afghanistan as an intelligence analyst. After leaving the Air Force in July 2013, Hale was employed by a defense contractor and assigned to the NGA, where he worked as a political geography analyst between December 2013 and August 2014. In connection with his active duty service and work for the NSA, and during his time at NGA, Hale held a Top Secret // Sensitive Compartmented Information (TS//SCI) security clearance and was entrusted with access to classified national defense information.

“Hale has now admitted what the evidence at trial would have conclusively shown: that he took classified documents from his work at the National Geospatial Intelligence Agency (NGA), documents he had no right to retain, and that he sent them to a reporter, knowing all along that what he was doing was against the law,” said Assistant Attorney General John C. Demers for the Justice Department’s National Security Division. “This conduct undermined the efforts of our Intelligence Community to keep us safe. Hale’s plea is another step in the Department’s ongoing efforts to prosecute and deter leaks of classified information.”

“Those who are entrusted with classified information have a duty to safeguard that information in order to protect our Nation’s security,” said Raj Parekh, Acting U.S. Attorney for the Eastern District of Virginia. “As an analyst for the Intelligence Community, Daniel Hale knowingly took highly classified documents and disclosed them without authorization, thereby violating his solemn obligations to our country. We are firmly committed to seeking equal justice under the law and holding accountable those who betray their oath to safeguard national security information.”

Here is a little more detail on the particulars.

The indictment against Hale stated that many of the classified documents were disclosed in an October 2015 news article. On Oct.15, 2015, Scahill published an article on the Intercept titled “The Assassination Complex” and cited “a cache of secret slides that provides a window into the inner workings of the U.S. military’s kill/capture operations at a key time in the evolution of the drone wars.”

“No court has ever decided whether or to what extent First Amendment protections exist under the Espionage Act,” Hale’s lawyers told the court in September 2019, adding, “It is abundantly clear from the history of the act that it was written with confidence that it would never be used to criminalize actions undertaken to inform the American public. They all thought it incomprehensible that the act could or would ever be applied to anyone but spies and saboteurs.”

So long as it’s a relative nobody, they don’t mind throwing the book at him.

But if a guy deliberately falsifies an FOIA request, launching an illicit investigation into a Presidential candidate that went on to illicitly restrict a President’s lawful Executive functions? He gets probation.

Adam Schiff can leak like a sieve, explicitly for political gain, and face no consequences for it.

Do we really need to get into what might be the most glaring of the violations of the espionage act that they conveniently ignored?

Hillary Clinton ignored the law but received special protection from both the courts and law enforcement. For countless Americans, this double standard of justice has destroyed confidence in the fair administration of justice. Americans would never have known about Hillary Clinton’s email and related pay for play scandals but for Judicial Watch’s diligence. We expect that the Biden State and Justice Departments will continue to protect her and cover up their own misconduct as we press for additional accountability through the courts.

The email exchanges among those ‘investigating’ Hillary laughed about her exoneration even before Hillary had ever been interviewed. The fix was in.

Equal justice under the law is ignored when the person has connections–to the Democratic Party.