The Abraham Accords Peace Deal How Trump Made It Happen 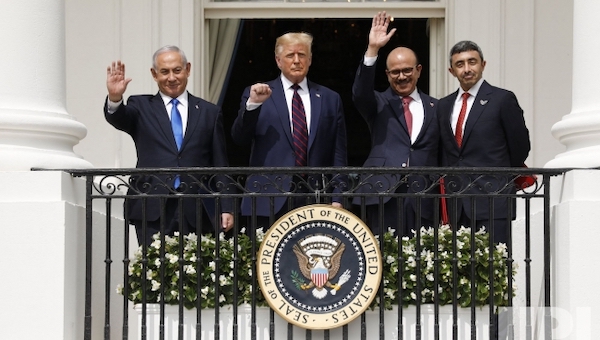 Today on the White House South Lawn, Israel, the UAE, and Bahrain signed the Abraham Accords, the first peace deal between Israel and Muslim Arab states in over a quarter-century.

Last week when the President announced that Bahrain would join the UAE today in signing the accords, the mainstream media barely covered the historic achievement by President Trump. But, even those in the media who covered this President Trump’s peace achievement didn’t cover (or understand) how Trump made it happen. The President didn’t just call the UAE to say, “Hey, why not break the ice and make peace with Israel.” The accords signed today is the result of long-term forward-thinking and a three-year-long strategy.

After two years of Jared Kushner’s negotiating, in January, the President introduced the “deal of the century,” A plan designed to make peace between Israel and the Palestinians.

It was more than a peace plan because, in a way, it “set up” the Palestinians.

The President knew “the deal of the century” would have one of two results:

Trump correctly figured out that many of the moderate Arab States were tiring of the Palestinians refusal to even try to make peace.  They were tired of having to carry the Palestinians and were already dealing with Israel behind the scenes. The ones already working with Israel were the Sunni-led states like UAE and Bahrain (and the Saudis), because of their fear of Shia Iran.

But two things had to happen before the U.S. could take advantage of that gulf states’ frustration. Trump had to recognize Jerusalem as Israel’s capital and move the U.S. embassy there. What this did was take the religious component out of the equation. The Arab States who made peace would not be conceding the Muslim’s third holiest city to Israel, now that it’s a done deal.

The second move Trump had to make was making America energy independent.  With that independence, no oil-producing nation could claim economic leverage over the United States.

The next moves were the “out of the box” ones. As you may remember, the supposed peace experts of previous administrations always claimed that no Arab country would ever formalize ties with Israel before a Palestinian state was created. Trump figured out that if he started with the “low-hanging fruit,” the rest of the Arab world, beginning with the ones physically closest to Iran, a breakthrough was possible.

Trump correctly figured out that the moderate Arab States were tiring of the Palestinians refusal to try to make peace.  Thus, the UAE peace deal was ripe for negotiating and breaking the ice.   But it wasn’t a one-off. It was the result of a long term strategy of a President who thought out of the box, and once the ice was broken, more countries would follow. In the month since two countries agreed to the deal, UAE companies have already begun to work with Israeli ones. As more states make peace with Israel and reap the economic benefits of making peace with her strong multi-faceted economy, it becomes easier for other countries to join in, and the pressure on the Palestinians to make peace builds. In the end, if they don’t join in soon, they will be left behind.

Trump has a totally different way of looking at and negotiating Middle-East peace. So far, it seems to be successful, and there is no reason to believe the success will not continue.