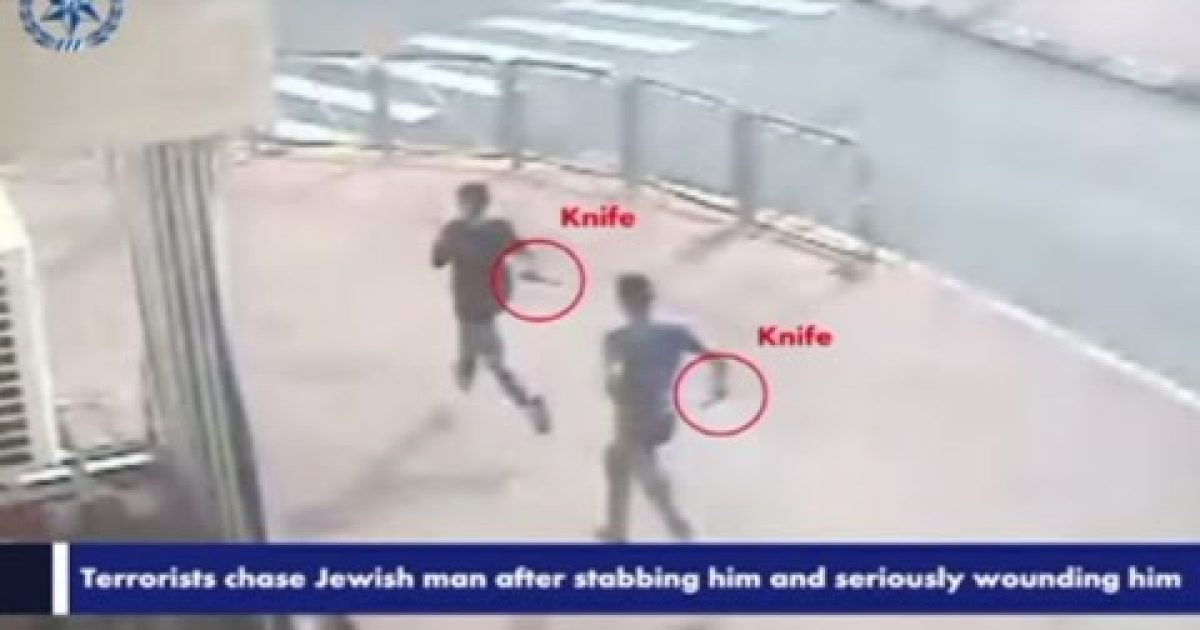 After inciting the violence in Jerusalem and the rest of Israel with false accusations about the Israelis trying to change the status of the Temple Mount and allowing Jews to pray, Palestinian Chairman Abbas is continuing to incite the hatred with fake stories about an executed 13-year-old kid who is very much alive.

The story of the “dead” kid was picked up and run as major news by the mainstream media without any investigation or context which is the normal MSM practice when reporting from Israel.  Even if they believed the terrorist/child to be dead, they knew and omitted the fact that the “not dead”  kid Ahmed Manasra carried out a stabbing spree on Monday with his cousin Hassan Manasra, 15, seriously injuring a 13-year-old boy and 25-year-old man.

As you can see in the security camera video below, Manasra and his cousin, were intent on stabbing Jews.  They are then seen chasing a man, they had just stabbed out of camera view. Next a  camera at a different shop documented them looking for another victim, and catching the 13-year-old Israeli boy as he exited a candy shop and got on his bicycle. The boy falls off his bicycle and the two young terrorists are start stabbing him with knives. The next scene shows one of the terrorists running on the light rail tracks toward police officers who arrived at the scene. Spotting the knife in his hand, the officers fire at him.

In a speech made on Wednesday night, Abbas continued his incitement, saying:

“We will not give in to the logic of brute force and policies of occupation and aggression practiced by the Israeli government and its herds of settlers who engage in terrorism against our people and our holy places and our homes and our trees, and the summary execution of our children in cold blood, as they did with the child Ahmed Manasra and other children in Jerusalem and other places,”

….with no mention of the stabbings

Ahmed Manasra wasn’t killed by police bullets, he was hit by a car as he was running away. And he wasn’t killed, or if he was— he’s feeling much better now as you can see by the video below he’s alive and getting better in Hadassah hospital.

“An Arab boy critically wounds a Jewish boy, and after the security forces stop him so that he cannot continue with his stabbing spree, he is turned into a martyr who was supposedly executed, having done no wrong, Well, first of all, he is not dead, he is alive. Second, he was not executed, he attempted to execute. He attempted to kill and execute, but your spokesperson announces the complete opposite in a distorted and outrageous statement.”

On Fox News Thursday Jerusalem correspondent Conner Powell talked about the incident but ended by saying that Israeli police didn’t execute the boy as Abbas said, the boy was only wounded, giving the impression that the boy was shot by Israeli police instead of being hit by a car as he tried to escape.  Sadly Powell’s report was the closest to the truth.

This incident is reminiscent of the case of Mohammed al Dura, the Palestinian kid who was supposedly killed by Israeli fire in 1990 and the video report by French TV became a rallying cry for Palestinian terrorism. Except when the raw video was released by a French court over a decade later it became apparent the entire incident was staged.

It’s the same pattern, the Palestinians lie and the entire world believes them.  This incident as well as others such as the al Dura one, are believed because they are the modern equivalent of the medieval anti-Semitic blood libel, and at their core these fresh charges are examples of Jew-hatred.