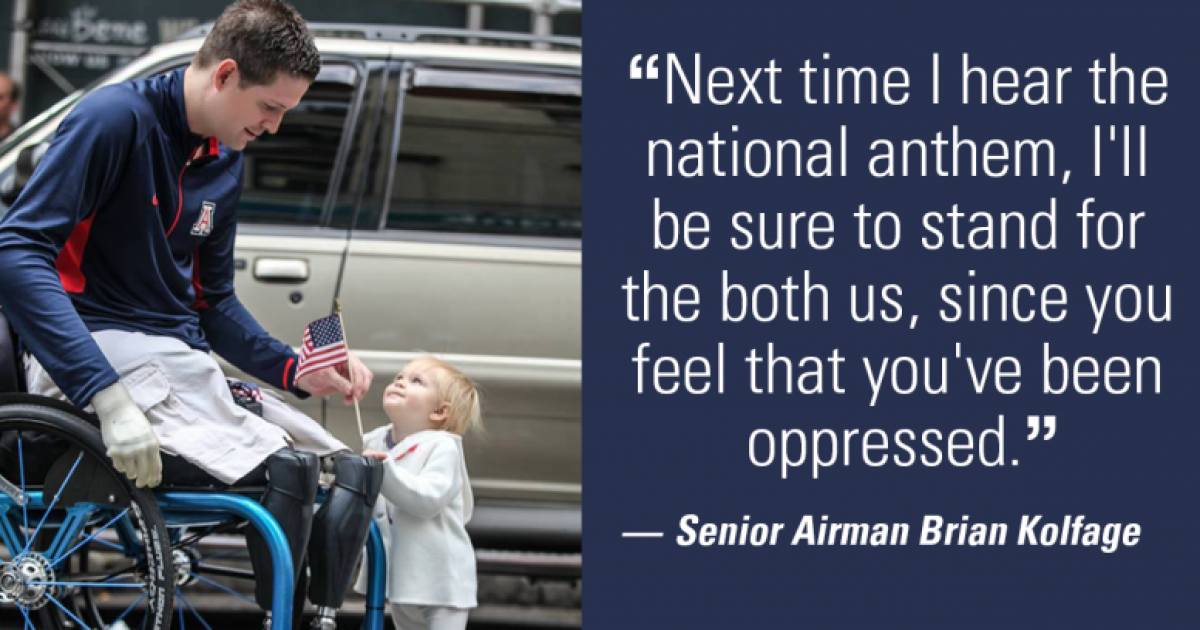 49ers Quarterback Colin Kaepernick has every right to disrespect our National Anthem as he did by last week by not standing when it was played during an exhibition game. But the same freedom he was “crapping on” last week give us the right to criticize him for his disrespect to the flag, for the people who fought and died to give him the right to be a jerk, and for the system that allowed him to grow up and make millions of dollars playing pro-football.

One of my colleagues at Liberty Alliance is Senior Airman Brian Kolfage a wounded warrior, who delivered perhaps the most powerful criticism yet of the rich kid who doesn’t appreciate what this country has given him. Unlike paper tigers like Kaepernick, Senior Airman Kolfage is a real hero who put his butt on the line to make sure people like Kaepernick can say idiotic things.

This is the message to Kaepernick that Kolfage put up on his Facebook:

Colin Kaepernick I lost my legs and arm fighting in the US military, the same military that I took an oath to defend our nation and flag from enemies foreign and domestic. Next time I hear the national anthem I’ll be sure to stand for the both us since you feel that you’ve been oppressed. We live in America, the land where no one is truly oppressed in the grand scheme of things. If you want to see the real meaning of oppressed I suggest you enlist in the military and travel abroad to the Middle East where you will witness what oppression is. Where women are beaten and killed in honor if they are raped, where 6-year-old little girls are forced to marry men in their 60’s, that’s just a little taste of what oppression is. You Know NOTHING of what oppression is. Every American has a choice and every opportunity to better their lives, this is America the greatest country on this planet.

Allow me to add something to what Senior Airman Kolfage wrote.

Mr. Kaepernick today you are a big shot in your mind, a quarterback for a NFL team who once single-handedly almost got his team to the Super Bowl, and that is an achievement. And your words and actions may give you another burst of publicity, especially since the word is that the 49ers are willing to unload your overpriced contract on any team that will give it thirty-seven cents and enough Gatorade that will refill their field-side cooler. Based on your recent statements you have probably made yourself so toxic that the Denver Broncos would prefer to have Marc “Butt-Fumble” Sanchez as their backup quarterback than you. Based on your pre-season play there is a good chance that if they can’t trade you, the 49ers will release your ungrateful arse and rid themselves of your overpriced contract. Should that happen, you will probably call it oppression but the truth is that is also part of the freedom that so many American heroes have fought for.

As for heroes like Senior Airman Kolfage, there is no whining about oppression, despite the fact that he lost both his legs and his right hand serving this country. Our military heroes don’t get to wear red shirts telling opponents not to touch them like quarterbacks do during practices.

Senior Airman Kolfage was on his second deployment for Operation Iraqi Freedom in 2004. On September 11, 2004 after working a night shift at Balad Air Base, Iraq, he awoke in the afternoon, left his tent to get some water and walked no more than 25 feet when the airbase came under a rocket attack. It would be the last time he would walk on the legs he was born with. A 107mm rocket shell exploded about three feet from Airman Kolfage. He was thrown several feet in the air and landed against a wall of sandbags, still conscious, and began calling for help. (Read more at http://briankolfage.com/)

Unlike you Mr. Kaepernick, Senior Airman Kolfage doesn’t complain instead he lives by this motto, “To be upset about what you don’t have is to waste what you do have.” Today he swims, scuba dives, surf, walks, dress himself, drives, in other words he is all around independent and drive, and just be independent, even got a Bachelor’s degree in Architecture without his dominant right hand (remember architects need to draw). Most importantly (IMHO) Brian is a husband and father.

You see Mr. Kaepernick, Brian Kolfage is a hero, not because a scumbag with Iranian funded rockets blew off his right arm and both his legs, but because along with serving our country, he didn’t see his injuries as some sort of oppression.  Despite the fact that he’s still the most severely wounded Airman to survive any war, Senior Airman Kolfage meets with newly wounded vets to them new hope for their future. Rather than whining about non-existent oppression like you do, this hero with much more on his plate than you would ever know takes care of other wounded veterans who were in need of mentoring.

And it isn’t limited to veterans.

Last year he traveled to Ukraine to visit an 11-year-old boy who picked up an RGP he found on the field where he was playing with his brother and friends. The boy began running with the grenade. When he was tagged by a friend, he tripped and fell causing the RPG to hit the ground and explode. The boy lost his brother and his friends were gravely injured. The child (named Mykola) had the worse injuries, losing both legs and right hand, along with all his teeth. He also has internal injuries, hearing problems, and severe facial trauma.

When Brian Kolfage heard about the boy with these severe injuries, he traveled to Ukraine to cheer him up and most importantly show him that even severe injuries could be overcome.  By the time Kolfage left, little Mykolas was smiling, goofing off, exhibiting a cockiness that he would conquer his challenge, and that the Senior Airman was a life-long friend.

Based on your whining Mr. Kaepernick you will never understand what Senior Airman Kolfage means when he says:

Life is at best uncertain, and while people measure a successful life in many ways, maybe the best measure is the impact we have on the lives of others.

Sure this country has problems, but even if the worst problem in this republic were multiplied by ten, it would still be the greatest, freest, country in the world, where even an adopted kid could grow up an make millions of dollars throwing a football.

Based on the impact he has had on the lives of others, Brain Kolfage is a hero in my book and in the hearts of many Americans.

However based on the lack of respect you have shown for the only country in the world where you can have the privileged life you now lead, you are at best a transient slug who very temporarily crawled out from under a rock for his 15 seconds of fame.

I pray you will figure out how much you have in your “oppressed” life, before it’s too late.