A Snarky Guide To The Differences Between Christmas And Hanukkah 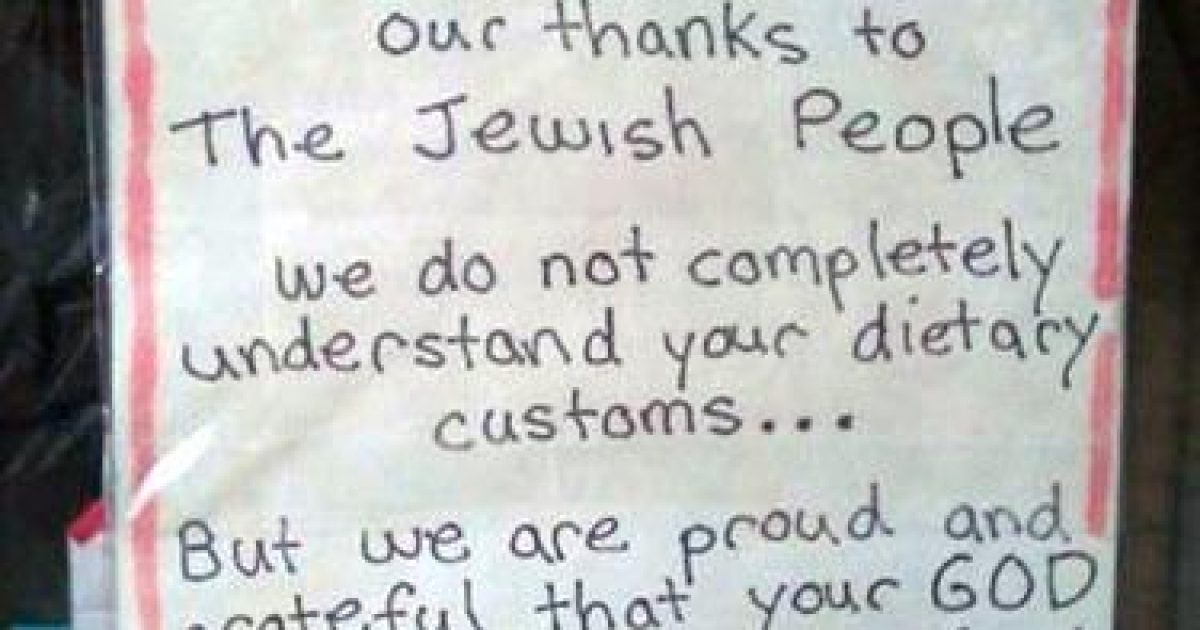 Here in the U.S. we are already into the “holiday” season which begins officially on Thanksgiving. One sad thing about the end of the year holidays is that most Jews do not understand Christmas…and most Christians don’t get Hanukkah. And while the Christians still have three weeks till Christmas, Hanukkah starts this coming Sunday night 12/6 so as a public service it’s time for me to explain the difference between the two (in my own snarky way).

Below are 18 difference between Christmas and Chankuah, all of it true (IMHO) some of it snarky:

1. Christmas is one day, same day every year, December 25. Jews also celebrate December 25th…it’s a paid day off work. We go to movies (there are no lines) and our annual Christmas pilgrimage to get Chinese food (a traditional Jewish food)— Chanukah is 8 days. It starts the evening of the 24th day of the Hebrew month of Kislev, whenever that falls. Most Jews never know when that day falls on the secular calendar until a non-Jewish friend asks when Chanukah starts. A question which force us to consult a calendar provided free from the kosher butcher or the local Jewish Funeral Home.

2. There is only one way to spell Christmas. No one can decide how to spell Chanukah, Chanukkah, Chanukka, Channukah, Hanukah, Hannukah, etc. I like to use them all–even in the same post.

3. Christmas is a major Christian holiday. Chanukah is a minor Jewish holiday. Chanukkah is only a big deal in America because Jewish parents wanted their kids to be able to brag about getting gifts also. But that is a American-Jewish fabrication. Hanukkah isn’t mentioned in the Torah, it was created by rabbis. Now that’s not necessarily a bad thing, but bigger holidays like Passover and Sukkot for example were designated by God. And God outranks the rabbis (which is a fact that some rabbis agree with).

The books of Maccabees which tells the Chanukkah story aren’t even part of the Jewish canon, there are many suggested explanations for this, the best of which (IMHO) is politics. The Maccabees broke tradition and took over the offices of King and high Priest, breaking a tradition from which was set during the exodus from Egypt when God designated Moses as political leader and the line of his brother Aaron holding the priesthood. When a monarchy was finally established it went to the house of David, and Aaron’s descendants remained the priests . Before you liberals start claiming biblical proof of separation of church and state, the reason for the biblical separation wasn’t a fear of religious influence on govt., but the possibility of a corrupt government’s influence on religion which is eventually what happened with the Maccabee family.  God knew that governments could become corrupt and since there were no bloggers in biblical times to watch over the government, the plan was for an incorruptible Priesthood who were supposed to keep the politicians in line. There were some believed that the Maccabees breach of tradition led destruction of the second temple in Jerusalem and exile of the Jews. When the canonical books were selected  20-30 years after  the destruction and exile feeling were most raw and the Maccabees were booted.

4 . Christians (and Jews) Don’t work on Christmas, Regular work schedules apply to Hanukah. Christmas is also a national holiday in the United States everybody is off. Because Hanukkah is a minor holiday work is permitted. Here’s a little secret for the non-Jews if a Jewish employee tells you they have to take off for Chankkah (or Purim for that matter) they are full of Shi, I mean full of latkes.

5. Christians buy and gift ugly sweaters for Christmas. Just like golf is the game of ugly pants, Christmas is the holiday of ugly sweaters. Jewish mothers and wives would never let us wear something that tacky.  “Uch you are not going out of the house wearing THAT!”

7. Christians get wonderful presents such as jewelry, perfume, stereos. The traditional Jewish gift is Chanukah Gelt (coins made from chocolate). Since the increase of type two diabetes and the protests about childhood obesity, many Jewish kids are feeling left out because they aren’t getting good stuff like their Christian friends, here in America Jewish kids get eight days of presents. Not all of the presents are stuff they want…some days they get practical presents such as pajamas, underwear, socks, and a scholarly Jewish books (which look great on their book shelves).

10. Christmas is a time of great pressure for husbands and boyfriends. Their partners expect special gifts. Jewish men are relieved of that burden on Hanukah. Adults give each other cheap gifts just to teach the kids gift about giving. My father was a painter. He used to get two wallets as gifts from the store he used to purchase supplies from. Every year my mother would wrap up the wallets, my dad would give one to mom and mom would give one to dad (we knew what they were doing but didn’t say anything). Even better, for guys dating the same girl for a long time, Chanukah is much better, no Jewish woman expects a diamond ring on Hannukah no, they want Jewelry on Hanukkah and the diamond ring another day.

11. Christmas brings enormous electric bills-lights around the outside of the house..the inside, on the tree..etc. Trees are sometimes lined with popcorn on a string. Hanukkah is a green holiday, it uses candles or oil. Not only are we spared enormous electric bills, but we get to feel good about not contributing to the energy crisis. We don’t give coal to the bad kids, it might make a mess of the carpet and the cleaning girl doesn’t come till next week. And as for the popcorn and candy canes on trees; waste food, are you kidding? There are children starving in Africa.

12. Christmas carols are beautiful and written by Jews..Silent Night, Come All Ye Faithful…. Of course, we are secretly pleased that many of the beautiful carols were composed and written by our tribal brethren, like White Christmas written by Irving (Isaac) Berlin. “Chestnuts roasting on an open fire,” and “I’ll be home for Christmas” were written by Jews also. Jews like Barbra Streisand and Neil Diamond sing those Christmas songs beautifully? And what did these Jewish songwriters write for their own people? BO-ring! Most Chanukkah songs are about dreidels made from clay or having a party and dancing the hora. And God-forbid a famous Jewish pop singer record some Hanukkah song. But we do have Adam Sandler playing Jewish geography.

13. A home preparing for Christmas smells wonderful. The sweet smell of cookies and cakes baking. Happy people are gathered around in festive moods. A home preparing for Chanukah smells of oil, potatoes, and onions. During Hanukkah (as well as every time Jews get together) every Jewish home is supposed to be full of loud people all talking at once.

14. Christian women have fun baking Christmas cookies. Jewish women burn their eyes and cut their hands grating potatoes and onions and then fry them in deep grease to make latkas (potato pancakes) on Chanukah. It’s another reminder of the suffering of our people through the ages, and another opportunity for Jewish mother to radiate guilt, “You see what’s happening to me…and just for you?”

15. Parents never withhold gifts to their children during Christmas. Jewish parents have no qualms about withholding a gift on any of the eight nights Hannukah, and they don’t blame a fat guy in a red suit and a sleigh pulled by reindeer either. Jewish parents take credit for their children’s suffering  just to remind them who is boss, “That’s it I am returning your Chanukah toys!” They will also find a way to make the kids feel guilty about it. “Great! Now I have to wait on a long line to return you Hanukkah gift!” Remember it’s the Catholics who invented guilt, but the Jews learned to market it much better.

16. The players in the Christmas story have easy to pronounce and spell names such as Mary, Joseph, and Jesus. The names in the Chanukka story are Antiochus , Judah Maccabee, and Matta whatever. By the way the Maccabee’s last name was not Maccabee, the word means hammer and is an anagram for a Hebrew phrase, “Who is like you oh Lord.” It doesn’t really matter what their names are, no one can spell it or pronounce them anyway. On the plus side, we can tell our Gentile friends anything with a lot of guttural cchh sounds and they will believe we are wonderfully versed in Jewish history.

17. In recent years, Christmas has become more and more commercialized. The same holds true for Hannukah, even though it is a minor holiday. But it kind of makes sense. I was in marketing for over 30 years and never figured out how to market a major holiday such as Yom Kippur. No food…music is somber…. “Hey everybody…Come to synagogue, starve yourself for 27 hours, become one with your dehydrated soul, beat your chest, confess your sins, a guaranteed good time for you and your family.”

Whichever one you celebrate…I wish you all a joyous holiday surrounded family and friends. And may the coming year be filled with love and good health.