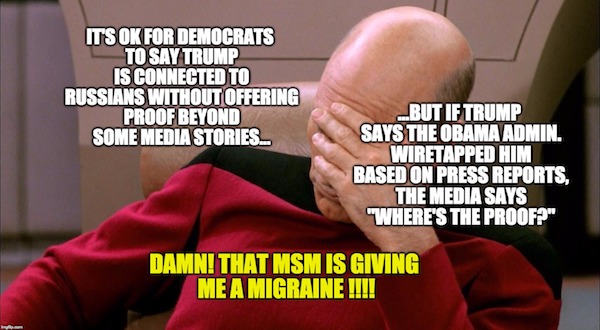 “Where’s The Proof?” is one of the most important questions a reporter can ask. But when used selectively it is an example of extreme media bias. This entire Russian story, both the Democratic party charges and the President’s claim he was wiretapped by the Obama administration originates from newspapers and internet news sites. Yet the MSM asks President Trump, “Where’s the proof,” but doesn’t ask the same questions about the Democratic charges against team trump.   BTW despite what the MSM says, President trump asked if the wiretapping was legal but never accused Barack Obama of a criminal act.

The allegations the Democrats are throwing at President Trump and his team began with leaked stories in the media and unsubstantiated charges by the Democrats that team Trump was involved in the Wikileaks Jon Podesta posts.  The MSM believed those stories to be true despite the fact that all of the intelligence agencies say that there is no proof of improper contact between team Trump and the Russians. Not once has someone in the mainstream media asked Democrats “where’s your proof?”

On the other hand the back up for the president’s claim that Barack Obama bugged his team can also be found in the media. We know the NY Times reported in January team Trump was wiretapped. Both Heat Street and National Review reported that the were FISA wiretap warrants issued to monitor Team Trump. The Mike Flynn scandal, wouldn’t have occurred unless someone was tapping Mike Flynn’s phone. And just like the rumors about the Trump team many intelligence leaders are saying the Obama administration wire taps never happened. Unlike the rumors about the Trump team the first question reporters ask administration spokespeople is where is the President’s proof.”

Sarah Huckabee Sanders: You know, I don’t think he does, George. I think he firmly believes that this is a storyline that has been reported pretty widely by quite a few outlets. The wiretapping has been discussed in The New York Times, BBC, Fox News and we believe that it should be looked at by the House Intelligence Committee.

Stephanopoulos: President Obama. One of them, based on anonymous sources, says there might have been a court ordered FISA wiretap. That has been denied by the former director of national intelligence, James Clapper.

Sanders: Look, I love how anonymous sources don’t matter anymore. We’ve been dealing with anonymous sources and having to fight back against that for the last six months. It’s funny how the media now starts to

Stephanopoulos: Sarah, that is simply — that is not true.

Sanders: They committed over the weekend —