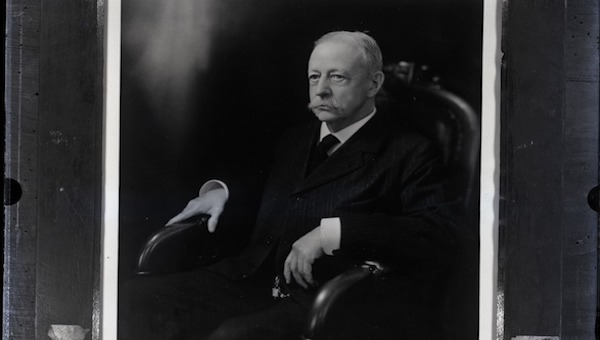 If American Jews “decide to remain apart,” antisemitism will rise to the point that “blood will be spilled,” one of America’s most prominent educators reportedly warned one hundred years ago this week.

That blunt and menacing demand was made by the president of Harvard University, A. Lawrence Lowell. It’s a reminder that the intense antisemitism in America in the 1920s was espoused not only by street corner bullies but among some leading figures in the academic community as well.

Lowell was said to have uttered his threatening words in a conversation with Harvard alumnus Victor Kramer when the two shared a train compartment in late December 1922. A few weeks later, Kramer recounted the conversation at a Manhattan meeting, and a New York Times correspondent who was present reported it on January 15.

“President Lowell takes full credit for the plan to limit the number of Jews who are seeking admission into Harvard,” Kramer said. “It is his view that so long as the Jewish people decide to remain apart, as a distinct entity in American life and not merging in a social way by intermarriage with the Gentiles, just so long will prejudice continue and even grow worse.”

“President Lowell also asserted that a Jew can not be an American, for to be an American, in his opinion, one must be that and nothing else,” the Times reported. “President Lowell predicted that within twenty years we will see in the United States the same conditions that now exist in Central Europe, where blood is spilled as a result of anti-Semitism… His advice was that the Jews drop their faith.”

The next day’s Times carried a statement from Lowell that he “denied having said the things attributed to him,” claiming that Kramer had “grossly misrepresented” his views. Kramer, however, stood by his account, citing two witnesses who sat next to them and heard Lowell’s statements.

The theme of the attributed remarks—that Jews themselves are to blame for Antisemitism and responses to Jewish behavior could get much worse—was consistent with Lowell’s previously expressed opinions. In fact, a letter Lowell wrote to another alumnus in 1922 along these same lines had been quoted in the Times the previous June.

“The anti-Semitic feeling among students is increasing, and it grows in proportion to the increase in the number of Jews,” Lowell wrote then. “If their number should become 40 percent of the student body, the race feeling would become intense…All this seems to me fraught with great evils for the Jews and very great peril for our community.”

That was why Lowell went to the Harvard Board of Overseers in 1922 with his proposal to reduce the number of Jewish students on campus, which was about 25% of the student body. Until then, admissions had been determined on the basis of merit, that is, grades and test scores. Lowell and the board devised new criteria that would allow “careful discernment of differences among individuals,” as Lowell put it.

Henceforth a Harvard admissions officer could reject an application based on the applicant’s “character.” Also, the applicant would be required to state his “race and color” and “religious preference” and would have to explain if either of his parents had ever changed their names—so that the admissions officer would know whose “character” required special scrutiny. Applicants from New York City were classified according to whether their family name and photograph indicated they were Jews; they were classified as “J1” (definitely Jewish), “J2” (probably Jewish), or “J3” (possibly Jewish). Thus Jews could be singled out for rejection without anybody having to say the reason was that they were Jews.

Franklin D. Roosevelt, who served on the Harvard board in the 1920s, later boasted of his role in this episode. He and his fellow board members decided that “the number of Jews should be reduced one or two percent a year until it was down to 15%,” President Roosevelt explained to Henry Morgenthau, Jr., the only Jewish member of his cabinet, in 1941. “You can’t get a disproportionate amount of any one religion.”

Lowell and FDR also shared indifference to the plight of Jews in Nazi Germany. In his book The Third Reich in the Ivory Tower, Prof. Stephen Norwood described Lowell’s rejection of an offer by a charitable foundation in 1933 to pay the salary of a refugee scholar from Nazi Germany if Harvard would hire him. Lowell accused the foundation of trying “to use the College for propaganda purposes.”

James G. McDonald, the League of Nations High Commissioner for Refugees from Germany, requested an appointment with Lowell in March 1934. Lowell’s secretary told McDonald—according to his diary— “that he wasn’t interested in German refugees” and “that he was tied up the whole day,” so, therefore, “couldn’t see me.” But when Hitler’s foreign spokesman, Harvard graduate Ernst “Putzi” Hanfstaengl, visited the campus three months later, Lowell found the time to have a friendly meeting with him.

Although a century has passed since Lowell, FDR, and their colleagues acted against the admission of Jewish students, Harvard is only just beginning to come to grips with this dark chapter in its history. Three years ago, following publicity about Lowell’s anti-Jewish policies (and policies hostile to other minorities), the faculty deans decided to take down a portrait of Lowell hanging in Lowell House, an undergraduate dormitory. The building itself, however, continues to bear his name. One wonders what sort of revelation it would take for Harvard to finally do something about that.

Dr. Medoff is the founding director of The David S. Wyman Institute for Holocaust Studies and the author of more than 20 books about Jewish history and the Holocaust. His most recent book, America and the Holocaust: A Documentary History, was published by the Jewish Publication Society of America / University of Nebraska Press. And available on Amazon(as are his other books).
d
Facebook Twitter Flipboard