68 Years Ago: The Exodus, Israel’s First Ship of State, Landed In Haifa (Without Paul Newman) 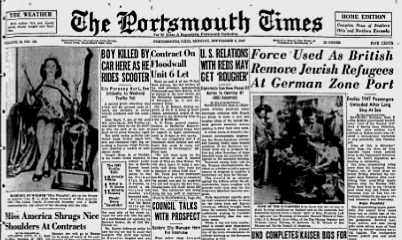 With the White Paper of 1939 the British caved into Arab pressure (as they have done before and as they still do today). The Paper severely limited the number of Jews that could enter what was then called Palestine.

The White Paper meant that Great Britain was causing the death of hundreds of thousands of Jews who could have escaped the Holocaust, had they a place that would take them in.   The US refused to take them onto American soil FDR believed there were already too many Jews in the U.S. and Churchill refused to take them on English soil.

Decommissioned in 1946, the ship the President Warfield was bought for $8,000 as scrap by the Western Trading Company (a front for the Haganah, which later became the Israel Defense Forces).  Jewish-American Sam (the Banana Man) Zemurray was instrumental in obtaining the ship for the Haganah, which would explain its Honduran registration as Zemurray United Fruit Company, a company which pretty much owned Honduras). The President Warfield was refitted in Baltimore and sailed from that port for France on 25th February 1947 where it picked up over 4,500 Jewish refugees.

On 17th July 1947, the President Warfield was renamed “Exodus 1947” in a ceremony on the open sea, the Zionist blue-white flag with the Star of David was hoisted and “Hatikvah, (the Hope)” which eventually became the Israeli national anthem, was sung over and over.

The following night, two British destroyers rammed the “Exodus 1947” from both sides, damaging the hull, railings and lifeboats. It was boarded by sailors and Royal Marines and a desperate struggle developed, the refugees using tin cans, screwdrivers, potatoes, bottles, wooden boards and metal bars as weapons.

As described by a refugee Noah Klieger, “we were determined not to surrender the ship to the British without a fight. It was an unequal battle, and eventually the Royal Navy boarding party, using truncheons and light firearms, succeeded in bringing the “Exodus” under its control. The clash had lasted several hours and resulted in three deaths –- Second Officer William (Bill) Bernstein, an American Aliyah Bet volunteer crew member, a 15-year-old refugee Zvi Jakubowitz, and one other. Some 150 were injured, including other American volunteer crew members.”

After reaching Haifa, British soldiers transferred the “Exodus 1947”
passengers, exhausted from the sea journey and the battle, to three
freighters converted into caged prison ships. It was named “Operation
Oasis.”

The three caged prison ships, departed Haifa with the “Exodus” passengers. The refugees assumed that as illegal emigrants they would be interned in camps on the island of Cyprus. But the three prison ships were sailing towards the European mainland, back towards France. The conditions on board these ships were harsh. The refugees lay crammed together in the bare holds of the freighters.

A confidential report kept in the files of the child-tracing service and dated 31 October 1947 makes it clear that the phenomenon of anti-Semitism did also exist among the echelons of the British Mandate powers. Using sharp words, the report gives a disparaging assessment of the Jewish committee established in Pöppendorf stating that the reason for the children’s being destined for Palestine were incomprehensible considering that not even one of the children had “Palestinian” parents.

The correspondence files bear witness to the fact that these children often times were completely on their own. Some of them had fled the Germans together with their parents leaving Poland for the Soviet Union. Having arrived in the SU, they had been deported by the Soviets to Siberia. And not seldom did it occur there that the children lost their parents, brothers and sisters and their whole family to a premature death caused by forced hard labour their dear ones were not able to cope with.

Sixty-Eight years ago, the British appeased the Arabs, denied Jews entry
into the Holy land and sent them back to the Germany from which they had
just escaped. Today the US, Britain and its European allies are still
appeasing radical Islamists, their terrorism, their call for the destruction of
Jewish State, and the anti-Semitic hatred they teach their children.

The battle to save Israel and the Jews no longer takes place on a rickety old ship, the Jewish State now has a modern army for protection, sometimes the battle takes place in the White House or Congress, make no mistake about it…the Jewish people are just as precarious position today as they were 1939 or in 1947. The only read difference is that anti-Semitism is now back in favor.