The 47 Strange Deaths Around Bill And Hillary Clinton: Part 3 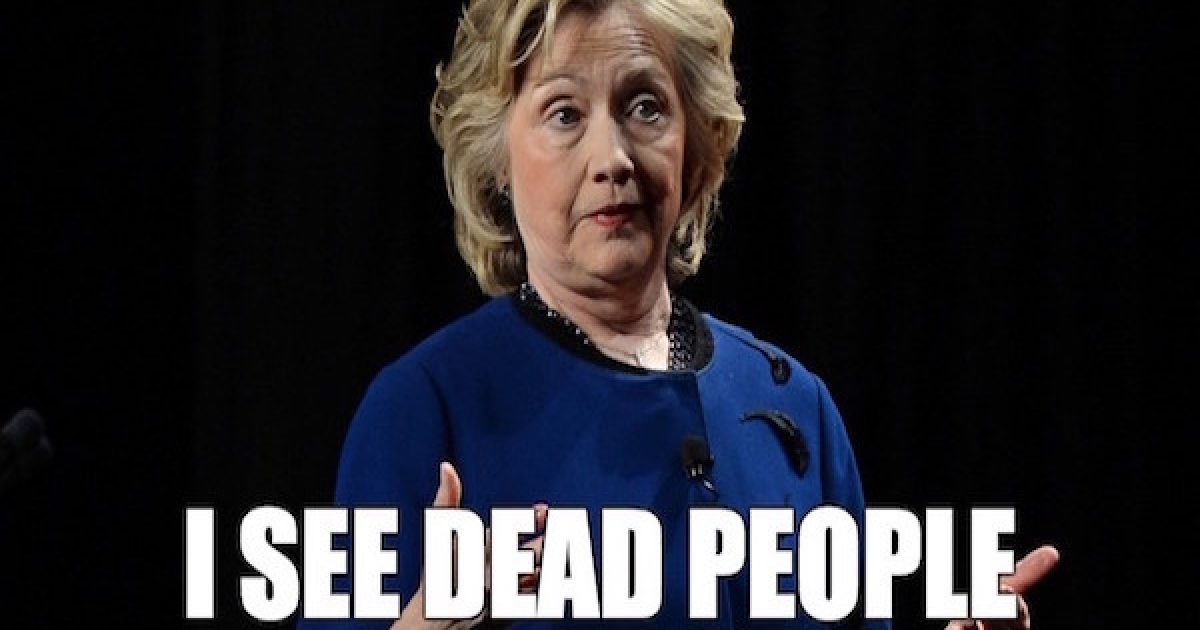 Funny things always happen to Bill and Hillary Clinton, friends have this nasty habit of turning up dead. We all gotta go sometime, but Clinton’s buddies seem to go under weird circumstances (and many by suicide).

My friend Tami Jackson has compiled a list and description of 47 Clinton friends whose deaths seemed a bit odd. We ran part one on Friday and part two yesterday, today we present the third part of the Clinton body count.

While all these elite wonks and writers scurry to anoint Hill and pen the fait accompli, I would like to continue my quest to inform Americans, to remind us what’s behind the celebrated veneer of Ms. Clinton.

As for the rest of her questionable life story? Well, that’s where new media can pick up the brush and paint in the rest of the picture.

Hillary and Bill Clinton are pursuing their goal for ever more power with the relentless abandon and iron will of an Olympic athlete. But unlike the Olympic sporting amateurs, Hill and Bill are pros: they seem to get what they want, no matter the cost.

Take a look at the next 10 people in this series who met with an untimely death. And again, I do NOT assert a direct link between the Clintons and the deaths.

However, use common sense. Use the science of probability. And ask yourself how likely is it that an average person would have this number of folks, in their close circle of acquaintance, die mysteriously or be the victim of a hit-style murder.

Mr. KENNEDY. Mr. President, the tragic plane crash in Croatia last month that took the life of Secretary of Commerce Ron Brown also took the lives of other outstanding officials in the Department of Commerce, including Charles F. Meissner, who was Assistant Secretary for International Economic Policy and who was also the husband of Doris Meissner, the Commissioner of the Immigration and Naturalization Service. During the 1970’s, he had served with great distinction for several years on the staff of the Senate Foreign Relations Committee.

According to the National Transportation and Safety Board, the crash was due to “AN INADEQUATE ANNUAL INSPECTION OF THE AIRPLANE AND NON-COMPLIANCE WITH AIRWORTHINESS DIRECTIVES BY COMPANY MAINTENANCE PERSONNEL.”

The NTSB says the airplane caught fire in the air and crashed while the pilot attempted to make an emergency landing. Barry Seal was a drug-running TWA pilot out of Mena, Arkansas. The scuttlebutt was that car mechanic Johnny Lawhorn Jr. found a check made out to Bill Clinton in the trunk of Seal’s car.

Barry Seal was a danger-loving pilot and the best-known cocaine smuggler of the 1980s. He was murdered in Baton Rouge, Louisiana, in 1986, by three men with machine guns and who were later arrested and convicted. They were Colombians and authorities say they were connected with the Medellin drug cartel. In 1981, Seal began running his smuggling operation out of a highly guarded and, for a while, a secret airport in Mena, Arkansas.

There have been questions of whether Bill Clinton, who was governor of Arkansas at the time, may have looked the other way if he knew about the drug smuggling operation, but there has not been proof of that.

I have received first-hand information from friends of Barry Seal, and the name that keeps popping up as a key to what happened is Federal Judge Frank Polozola.

I will augment this entry as I receive more information from my sources.

Johnny Lawhorn, Jr. died on March 31, 1998. Lawhorn owned a transmission repair shop and found a check made out to Bill Clinton in the trunk of Barry Seal’s car left at his repair shop. He was found dead after his car had hit a utility pole.

Here is the rough sketch of the Madison Guaranty debacle:

Jim McDougal was convicted of 18 felony counts of fraud conspiracy charges. The counts had to do with bad loans made by Madison S&L. This S&L was partnered with Whitewater Development Corporation, the subject of Whitewater probe, and owned, in part, by Bill and Hillary Clinton.

Madison Guaranty and McDougal hired Rose Law Firm, where the Mrs. Clinton worked, as a defense attorney. Mrs. Clinton’s Rose Law Firm billing records on Madison Guaranty and McDougal’s Castle Grande project that Hillary called IDC – Industrial Development Corporation. How much work she actually did on Madison and Castle Grande was the subject of the missing billing records.

Stanley Huggins died when his plane crashed, but the NTSB never released the crash investigation report. Friday, an Attorney and Clinton fundraiser died March 1, 1994, when his plane exploded. Don Henry and Kevin Ives are better known as “The boys on the track.”  Joseph Farahrecounts the story:

Unless you read the inside pages of the Arkansas Democrat Gazette (not one of my favorite pastimes), you probably missed what may be a significant development in what has become known in Clinton scandal parlance as the “boys on the tracks case.”

For those not familiar with the background, the story begins on August 22 when teen-agers Kevin Ives and Don Henry went out to a secluded area of Saline County, Arkansas, for a night of deer hunting. Early the next morning, a northbound Union Pacific train ran over their bodies as they lie sprawled on the tracks.

Arkansas State Medical Examiner Fahmy Malak, appointed by Gov. Bill Clinton, quickly ruled the boys’ deaths “accidental,” saying they were unconscious or in a deep sleep as a result of smoking marijuana. That explanation didn’t add up to Kevin’s mother, Linda, who publicly challenged the finding. A local grand jury began investigating, resulting in the bodies being exhumed.

Another autopsy revealed that Don Henry had been stabbed in the back and that Kevin Ives had been beaten with a rifle butt. In other words, the kids had been murdered — murdered in an area known as a drop zone for drug smugglers.

Under public pressure over the official mishandling of the case from the beginning, Gov. Clinton called in two pathologists from out of state to review the work of the medical examiner and state crime lab where the autopsies were conducted. But when the Saline County grand jury tried to subpoena those experts for testimony, Clinton refused to allow it.

Mara Leveritt made the case famous with her 1999 book, The Boys on the Tracks: Death, Denial, and a Mother’s Crusade to Bring Her Son’s Killers to Justice.

The Boys on the Tracks is the story of a parent’s worst nightmare, a quiet woman’s confrontation with a world of murder, drugs, and corruption, where legitimate authority is mocked and the public trust is trampled. It is an intensely personal story and a story of national importance. It is a tale of multiple murders and of justice repeatedly denied.

The death of a child is bad enough. To learn that the child was murdered is worse. But few tragedies compare with the story of Linda Ives, whose teenage son and his friend were found mysteriously run over by a train.

In the months that followed, Ives’s world darkened even more as she gradually came to understand that the very officials she turned to for help could not, or would not, solve the murders. The story of betrayal begins locally but quickly expands.

Exposing a web of silence and complicity in which drugs, politics, and murder converge, The Boys on the Tracks is a horrifying story from first page to last, and its most frightening aspect is that all of the story is true.

The phrase that nags at me being, “Clinton refused to allow it.” And the subsequent question: why?

Keith Coney died on May 17, 1988. Coney asserted he had inside information concerning the Henry/Ives “Boys on the Track” case. In the news at the time, Keith’s mother, Betty Alexander, said her son knew the teenagers and related to her he had been nearby when Henry and Ives were attacked.

Coney died when his motorcycle slammed into the back of a truck during a reported high-speed chase.

Keith McKaskle made no secret that he feared for his life, because he also had information about the Don Henry and Kevin Ives “Boys on the Track” murder case. Kevin Ives’ mother, Linda, testified that Keith bid his friends and family good-bye shortly before his murder.

Local reports at the time:

The night of elections in 1988, he took two pennies out of his pocket and threw them on the bar there at the Wagon Wheel and said “If Jim Steed (Saline County Sheriff) loses this election, my life isn’t worth two cents,” and he was murdered by stabbing that night – 113 stab wounds.

McKaskle died on November 10, 1988. COD 113 stab wounds. Pretty safe to say that was no suicide or accident.

Gregory Collins was another who allegedly had knowledge of the circumstances surrounding the murders of Arkansas teenagers, Don Henry and Kevin Ives. Collins died from a gunshot wound in January 1989.