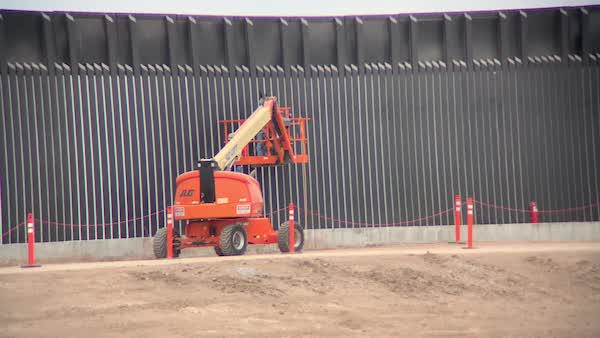 Every additional mile of border hardened is another mile where smuggling contraband into America is that much more difficult.

Defenders and critics will each run the numbers in their own favor. Still, it is beyond any debate that the new high-tech barriers installed under Trump are orders of magnitude superior to the sometimes laughable barriers they have since replaced, including some fencing that can be simply stepped over with no more difficulty than any typical farmer’s barbed-wire fence.

President Trump fulfilled a promise to install 450 miles of border wall along the U.S.-Mexico boundary by the end of 2020, according to the country’s top border official.

“Myself and the deputy commissioner, leaders here, we found out about it — we were briefed on Dec. 31 that we had actually reached the goal, and we had accomplished what we set out to accomplish,” Morgan said.

“I remember every time that I said with confidence that I, without hesitation, that we were going to accomplish this goal by Dec. 31,” Morgan said. “We were going to put 450 miles of steel and concrete along with all the essential attributes of the wall system Dec. 31. We were challenged, and a lot of people didn’t think we’re going to be able to do it. … That is a remarkable achievement.”

The construction represents a partial fulfillment of Trump’s campaign promises. Trump vowed as a candidate to put up 1,000 miles of wall on the nearly 2,000-mile border, which stretches from the Pacific Coast in California to the Gulf of Mexico in Texas. He also said he would get it done for $4 billion. To date, 738 miles of border wall has been funded for $15 billion. Four hundred and fifty miles of the 738 have been completed. –WashingtonExaminer

This is where the critics pipe up:

“But you promised 1000 miles!” Sure, but the Republican majority sat on their hands for two years, and Schumer/Pelosi used every obstructionist trick they could dream up — including extensive use of the courts. The promise he made in July was 450 miles by year’s end. That was completed.

“But most of that wall was already there.” Sure, if you call a couple of strands of barbed wire or corrugated tin a ‘wall.’ But the difference between then and now is night and day.

“But you said Mexico would pay for it” You got him there. Mexico didn’t pay for that wall. All they did was secure that Southern border so that 100s of thousands of would-be refugees didn’t crash our borders with their hands out. Has anyone crunched the numbers yet on how much money that has saved us? Take as long as you like.

Morgan has said that the 450 miles does not mark an end to the project, and pointed to $1.375 billion that was included in the recent omnibus spending bill passed by Congress and signed by President Trump.

That money completes a total of about $16 billion for the wall system, Morgan said, which will fund a total of almost 800 miles of new wall.

“So in addition to the 450 that we’ve already got on the ground, we’ve got funded 350 miles of wall system to go in the ground,” he said. “The overwhelming amount of those miles, that funding, the contracts have already been awarded.”

Some love Trump; others hate him. That polarized response really doesn’t bother him. The President seems to have been called for ‘such a time as this.’