Thanks Biden! DHS Preps For MASSIVE Surge Of Up To 400,000 Illegals In October 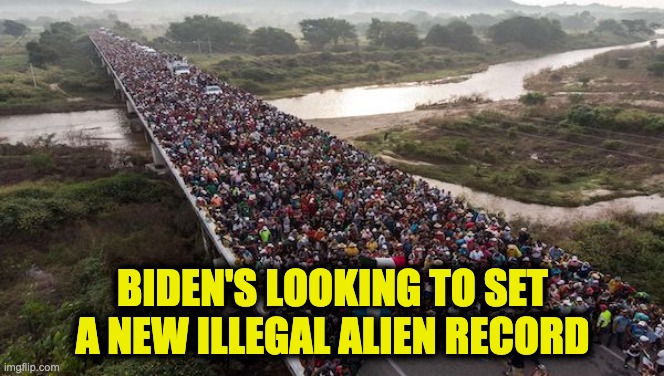 The Biden-Harris administration’s more “humane” border policy works like a flashing neon “OPEN” sign at the Southern border, and illegal aliens are getting the message.  400k illegals in October

Vice President Kamala Harris continues to search in the Northern Triangle for “root causes” of migration outside the U.S. and far away from the southern border. Well, when she’s endorsing anti-Israel statements that are played on Iranian TV.

Perhaps someone not born in the United States could clear up the border situation for her (Jeff Note: the author of this post is a LEGAL immigrant):

There are your root causes right there. You’re welcome.

There’s also a real problem with this administration giving some pretty mixed messages about crossing the border illegally.

Mayorkas says Biden administration opposes the wall because people crossing illegally is “one of our proudest traditions” pic.twitter.com/d5C7tjhnkH

A thriving industry has popped up in the last few years to smuggle people into the country illegally. Mexican cartels have found that trafficking migrants across the porous southern border for a fee is pretty good business — even while CNN warns that the Deadly Delta Variant™ will kill us all.

As we’ve seen in recent months, despite the fearmongering with the pandemic, business is booming.

And the cartels must be bracing for a windfall.

According to NBC News, the Bideh-Harris administration is quietly preparing for an unbelievable number of migrants heading to the U.S. in October.

WASHINGTON — U.S. officials are quietly preparing for what they think could be the biggest surge in traffic at the southern border in decades if a Covid restriction that has blocked most migrants for almost two years is lifted Thursday.

On a call this week with senior Department of Homeland Security officials, Secretary Alejandro Mayorkas asked whether the department was prepared for a worst-case scenario in which 350,000 to 400,000 migrants cross the border in October, according to two DHS officials familiar with the conversation.

A number that high would nearly double the 21-year record reached in July, when more than 210,000 migrants crossed the border.

NBC News: Actually as many as 400,000 migrants are heading to the border pic.twitter.com/ivNpatELVx

The surge of nearly half a million migrants could be caused by the Biden-Harris administration lifting the Title 42 restriction on allowing migrants into the country.

The Biden-Harris administration claims that they’ve been using Title 42 to return migrant individuals and families, but not unaccompanied minors.

That claim rings hollow as it’s been recently revealed by DHS Secretary Mayorkas that more than 12,000 Haitian migrants — most of whom had been living in South America for the last several years — had been released into the United States while their asylum claim is being processed.

Mayorkas also said he was “surprised” at the “tragic rise” of the Delta Variant of the Wuhan Virus at the southern border.

How do you take a liar like that seriously?

Judge Emmett Sullivan — whom you may recall as the activist judge who made Gen. Michael Flynn’s life hell for a while — has ordered the Biden-Harris administration to cease using Title 42 against families crossing into the country illegally.

Sullivan’s order would stop the Biden administration from expelling families under Title 42, allowing them instead to stay in the U.S. while they wait for their day in court to make asylum claims. Single adults, who were not part of the lawsuit brought before Sullivan, would remain subject to Title 42.

The Biden administration had considered lifting Title 42 altogether by the end of July. Some U.S. officials feared doing so would trigger a “catastrophic” migrant surge, and it was not lifted.

Now, the two DHS officials familiar with the matter say, the agency is again concerned about a surge, particularly if migrants misinterpret the change in policy as a signal that the border is open and that they will be allowed to stay in the U.S. regardless of the outcomes of their asylum cases.

So much for “Circle Back” Psaki’s claim that the flood of illegal migrants at the southern border is “cyclical” and “seasonal.”

Mayorkas admitted in a leaked audio that the situation at the border is unsustainable, and recently,  former President Barack Obama agreed.

? WATCH → Even Barack Obama thinks the border is a disaster:

"We're a nation-state. We have borders. The idea that we can just have open borders is something that I think, as a practical matter, is unsustainable."

You know it's bad when Democrats have lost Obama. pic.twitter.com/l95eoe0bMw

Back in March, U.S. Border Patrol was expecting more than a million migrants in 2021.

By the end of June, there had been more than a million apprehensions. That number doesn’t include those who managed to get in without encountering border patrol.

Then we learned of the surge of tens of thousands of Haitians in Del Rio.

So far this year, over 1.2 million people have already entered the country… and hundreds of thousands of others are on their way.

Biden says the border is closed; the 1.2 million+ illegal migrants that have streamed into our country this year alone say otherwise. Americans are paying the price for Biden’s failure. #BidenBorderCrisis https://t.co/nXGlE9XXWT

At what point does the Biden-Harris administration admit that this is a crisis? I wouldn’t hold my breath.