Yitzhak Rabin Was Killed 22 Years Ago Today: He Wasn’t The Blind Peacemaker The Libs Make Him Out To Be 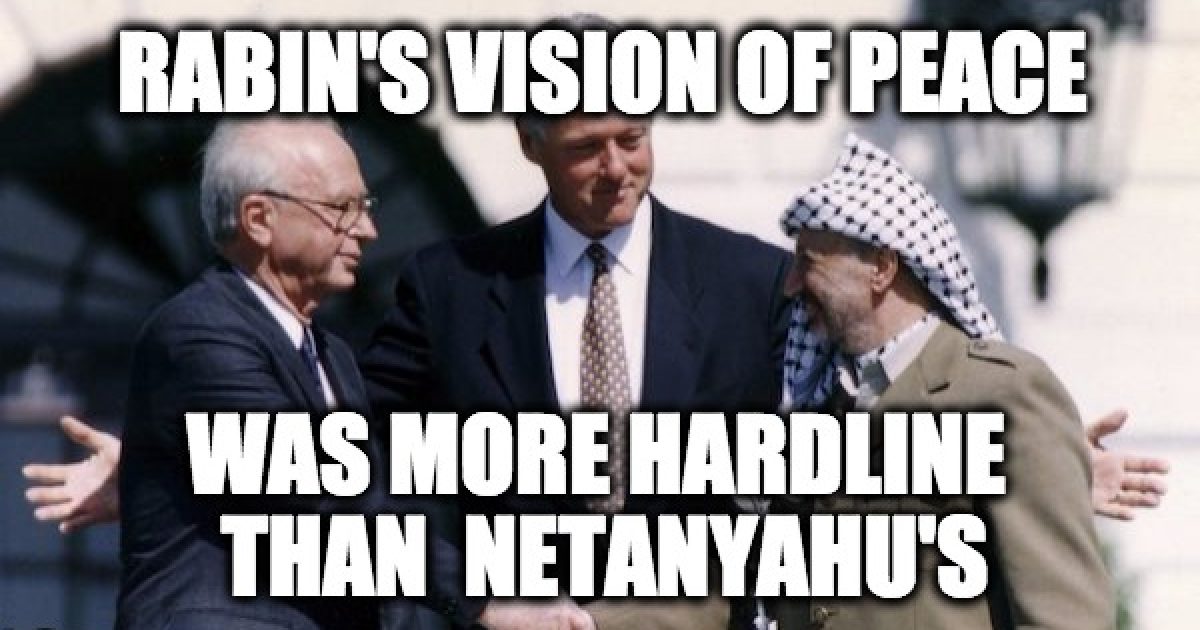 The official memorial service for the late Israeli Prime Minister Yitzhak Rabin will be held today, November 1st,  the 12th of the Jewish month of Heshvan, which is his yahrzeit —the anniversary if his death per the Jewish Calendar. The English date of his assassination was November 4, 1995.

“The scar from the assassination of Yitzhak Rabin will ensure for generations and will not be erased,” Netanyahu once said at a Rabin memorial ceremony atop Mount Herzl ceremony.The prime minister went on to say that Rabin had spoken of the threat posed by radical Islam to Israel and the entire free world, and he even quoted remarks made by Rabin to then-U.S. President Bill Clinton. “Rabin sought peace,” Netanyahu said, “but he recognized the unwillingness of a significant part of the Palestinians to make peace.”

Indeed what most people do not realize Rabin was not the “sacrifice everything for the sake of peace” person the liberal media painted. In fact, Yitzhak Rabin was the last prime minister of Israel that did not support the creation of a Palestinian State.

In fact, since his death twenty-two years ago, the myth of Rabin’s peacemaking expanded. While it is true that he was the Prime Minister who began the “Oslo Process, ” it is also true that Rabin’s final vision for the Oslo process was more hardline than supposedly “hawkish” Prime Minister Binyamin Netanyahu. Rabin did not support the creation of a Palestinian State, while Netanyahu does. Netanyahu agrees with Rabin that Jerusalem is the indivisible capital of the Jewish State.

Nine days before he was assassinated, Rabin delivered a speech to the Knesset that laid out his vision for the future of Israel and the disputed territories, including:

(The entire speech can be found here)

None of this is meant to denigrate the memory of the Israeli PM who was slaughtered over two decades ago, its more to show the true nature of the media and world leaders like the former American President Barack Obam who slanted Rabin’s legacy to tell the story they want to tell. They have taken upon themselves to recreate Rabin into something he was not. For many years, Rabin’s legacy was defined by the dreams of  the peace process that he was engaged in with the Palestinians at the time of his murder. Whether this was what he would have wanted has been debated by his relatives and confidants, some of whom were aware of his growing doubts about the intentions of Yasser Arafat, who was already sabotaging the diplomatic process by ordering terrorist attacks before, during, and after the time of Rabin’s assassination.

Bill Clinton surely would  have known that at the time of his death Rabin was ready to bail on the Oslo process.

Rabin was not the blind peace-maker like some of the Prime Ministers who followed him such as the late Shimon Peres, Ehud Barak, and Ehud Olmert. The Oslo process Rabin began came to be roundly criticized, as it led to deadly violence including the second intifada, while at the same time it consolidated the power of the terrorist Arafat. But who can honestly know what would have happened if a crazy zealot didn’t strike him down 22 years ago? Oslo might have been over long before the intifada and Arafat might have been sent back to his hiding place under a rock in Tripoli.

One thing is for sure, the same liberals who created the revered image of Yitzhak Rabin vilify Binyamin Netanyahu even though in some ways Bibi’s positions today are more moderate than the great peacemaker Rabin.