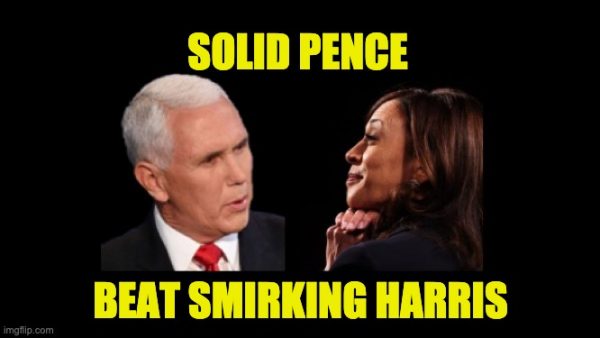 With a Presidential candidate many suspects of suffering from dementia, Kamala Harris had one real job during the 2020 VP Debate— look Presidential. She failed. Her facts were off. She told obvious lies and had an arrogant demeanor, eye rolls, head shakes, and smirks that made her seem unprofessional.   On the other hand, Mike Pence started a bit stiff, but as the debate went on, he opened up. He showed himself to be a seasoned and skilled manager who knew all the facts, explained the strategies behind the programs, and responded professionally to Harris’ snarky comments— many of which had no relation to the truth.

Pence showed that, if God-forbid he was required to take over for President Trump, he could handle the task, and the only thing Harris proved that she should only be in the oval office if she was an invited guest.

During the ninety minutes of the debate, I kept imagining my mother of blessed memory showing up on that Utah stage and telling the Democratic VP candidate to wipe that smirk off her face, or she will make it stick that way.

Perhaps showing her desperation, Harris repeated lies about the Trump administration that had long been proven false. But Biden kept pointing our her errors and the inconsistencies of Biden’s flip-flops on taxes, fracking, and fossil fuels. At one point, Harris claimed that their economic program will not cut taxes for the middle class. She promised that on “Day One, Joe will repeal” the Trump administration’s 2017 tax cuts, Pence responded: “She just told you, on Day One, Joe Biden’s going to raise your taxes.” DING!

Another great Pence moment was when he asked Harris about packing the court. When she gave a non-answer, VP Pence said, “I just want the record to reflect, she never answered the question. Perhaps at the next debate, Joe Biden will answer the question. And I think the American people know the answer. ” DING!

Pence won the discussions about the courts (and lied about Lincoln). He won on the environmental issues. He pointed out that Harris’s voting record is the most liberal in the Senate–worse than Sanders.  Personally, I liked his answer about the peaceful transfer of power (that the Democrats are still trying to change the 2016 results). He also seemed to have much better handling of foreign policy, especially China and Iran.

Harris won points during the discussion of CoronaVirus.  It was a real missed opportunity. Instead of presenting how the Administration’s handling of the pandemic was correct and that their response was much more successful than other countries, Pence gave the standard response–Trump enacted a China travel ban and Biden called it xenophobic. That’s true, but voters have heard it so often they tune it out.

Pence won the debate by a mile. Kamala Harris seemed more like a petulant child that a possible President. Mike Pence was solid, knew the details, and acted presidentially.

But the bottom line is that VP debates never have an effect on the election outcome. Remember when Senator Lloyd Benson absolutely destroyed Dan Quayle during the 1988 VP debate?   Quayle became VP.   As of now, there is no reason to believe this debate will change many votes.

Ed Morrisey has more analysis of the VP Debate at Hot Air. It’s worth your time to give it a read.