One Of Biden's Many Disasters 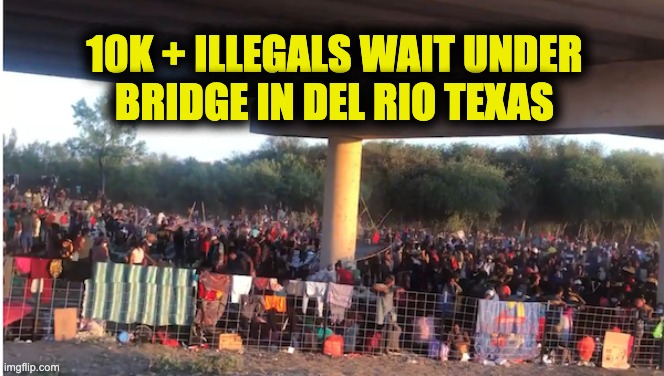 BU.S. Border agents have reported a 233 percent increase in the number of illegals they have encountered at the border year-over-year as Joe Biden’s wide-open border policy continues to leave the floodgate open for millions of coronavirus-infested illegals to flood our country.

10,503 illegal aliens are under this bridge tonight because Joe Biden made a political decision to cancel deportation flights to Haiti.

The Border Patrol is overcapacity. It’s indefensible, it’s inhuman, and it was entirely caused by Biden & Harris. #BidenBorderCrisis pic.twitter.com/LmWV52nmJc

In August, 49% of apprehensions were single adults, down 7% from July, and 44% of migrants overall were expelled via Title 42 public health protections put in place under the Trump administration and extended by the Biden administration.

The only good thing about the recent problems with the border is that the U.S. Supreme Court ordered Biden to re-instate Donald Trump’s “stay in Mexico” policy where illegals applying for entry will have to stay outside the U.S. while their requests are winding through our immigration system.

But that is a small victory. Biden is flooding this country with millions of sick, uneducated illegal aliens, some of whom are sex predators, gang members, rapists murderers, and other types of criminals.

Most sources add that approximately twenty percent of these illegal aliens have the COVID-19 virus.  Biden refuses to require that these illegals take the vaccine, he is only infringing on the rights of legal Americans.