First 2020 Presidential Debate Analysis: It Was Like Watching A Violent Train Wreck 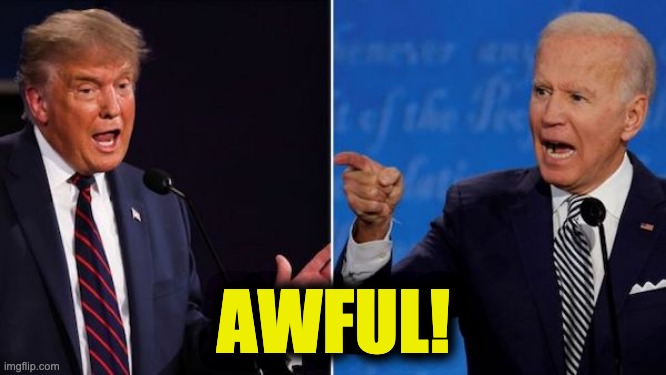 Holy Cow, it wasn’t a debate; it was more like a violent train wreck. When it was done I wanted to scrub my eyes and ears with Brillo Pads. first 2020 presidential debate

Any way one looks look at it, the debate was a failure for both sides. The President interrupted too much, and it hurt him. Joe Biden, whose campaign pitch includes that he is more civil than the President, ruined that claim as he was much nastier than Trump. Biden was arrogant and displayed a lack of respect for the office of President —not that he had to bow down to Trump, but he laughed at the President’s answers,  called him names like stupid or clown, said he was a racist and the worst President ever. It was reminiscent of the sighs, head shaking, and eye-rolls that cost Al Gore debate wins in the 2000 election. On the bright side, he didn’t call the POTUS ‘A Lying, Dog-Faced Pony Soldier.’

As for Chris Wallace, his pre-debate desire was to be invisible. He said the best result would be that at the end of the night, no one would remember who the moderator was. But by the end of the night, people remember him as being biased against Trump, and at times debating the President almost as much as Joe Biden. My friends at Big League Politics actually counted and reported that Moderator Chris Wallace Interrupted Donald Trump 76 Times, Biden 15 Times.

Perhaps the best indication of what Americans thought of the debate was that searches for “how to apply for Canadian citizenship” began to skyrocket about an hour into the debate per Google.

Joe Biden achieved his number one goal. He stood up for an hour and a half without tipping over, and he didn’t exhibit the loss of mental capacity that has been observed at other times. Biden did try to move to the middle but, in doing so, may have alienated the far left that runs the Democratic Party.  On the big news of the day, Biden said he opposed the timing of the SCOTUS nomination and that it should wait for a new Senate and possibly a new President. But then he deviated from the liberal line. Instead of ripping Justice Barrett, Biden disagreed with his previous statements and said, “I’m not opposed to the Justice.” Gee, Chuck Schumer must have been so shocked he pushed his glasses up where they belong.

After he clinched the nomination, Biden made with Bernie Sanders to lock down the support of Bernie’s Socialist followers. It promised agreement with many of Bernies’ positions. When Trump brought up the Biden/Sanders position paper, the former VP said it didn’t exist. That had to disturb Joe’s socialist handlers. However, they may be comforted as the “Biden-Sanders Unity Task Force Recommendations” is still on his campaign site.

Something that might have been supported by his socialist backers, over the course of the night, Biden seemed to brag about the fact that he would raise taxes and that he might shut down the economy.  That couldn’t have helped him with small businesses and the middle class.

Along with his constant calling the President names and ruining the “nice guy” image he was trying to cultivate and possibly alienating the far-left base of his party, two other things stick out. When asked if he would pack the Supreme Court, he refused to answer.  No, it wasn’t the typical politician dancing around an issue–Biden said he wouldn’t answer because, “Whatever position I take on that, that’ll become the issue.” On the one hand, he thinks that Americans should have a say in “selecting” the next supreme court justice, but on the other, he doesn’t believe America should know if he would pack the court and change it into another legislature.

When confronted by Trump about his lack of police support, “Name one law enforcement group that came out in support of you,” there was nothing but silence.  Voters concerned about Law and Order couldn’t have been happy with his claim that ANTIFA was an idea. Tell that to people like Andy Ngo, who was sent to the hospital after being beaten by an “idea.”

When Biden brought up the Russia hoax, calling Trump Putin’s puppy, it left the door open to the President, bringing up Hunter Biden’s scandals. He specifically brought up the $3.5 million payment Hunter got from the wife of the Moscow Mayor. Biden reacted by defending his son—but the wrong one—his late son Bo.

That had to be planned—to shift the attention away from his crooked son Hunter by getting sympathy for his late honorable son Bo Trump could have won that exchange if he expressed sympathy for Bo and all the people who served and then pivoted to the crooked Hunter.

Later on, Biden lied by saying the Hunter story was not true and has been totally discredited. Trump’s response was an honest “By Whom?” The information has been documented, some of it on this site, and the $3.5 million news came from a senate committee just last week.

No one won the debate, but IMHO the President Trump’s debate strategy prevented him from winning.

He spent months lowering the bar for Joe Biden to the point where the former VP had to do little more than stay alive to be seen as doing well. ‘Trump’s over-aggressive interrupting caused him to miss calling out certain Biden lies. Even worse, he protected Biden. It’s when the former VP talks continuously that he begins to lose his train of thought and starts blabbering. The President’s interruptions “prevented the blabber.”

Biden told lies about the President’s handling of the China Virus. Eventually, Trump got around to the fact that it was Biden who didn’t have a plan. Biden answered first. If instead of interrupting Biden’s lies if Trump’s response was something like “What would you have done Joe?” he would have given Biden enough rope to hang himself by blabbering.  The President could have brought a timeline and listed all the times he took COVID seriously while Joe Biden and his team were telling America to ignore it.

For example, both Chris Wallace and Biden brought up the Charlottesville lie. Liberals and MSM claim that after the riot, President Trump talked about very fine people on both sides.  He wasn’t talking about the White supremacists. Trump was referring to another group of Charlottesville demonstrators who came out that weekend—protestors who wanted the Robert E. Lee statue removed and protestors who wanted to keep the statue and restore the park’s original name. What Trump said that day was:

“You also had some very fine people on both sides.—You had people in that group that were there to protest the taking down of—to them—a very, very important statue and the renaming of a park from Robert E. Lee to another name.” and then got specific,  “I’m not talking about the neo-Nazis and the white nationalists. They should be condemned totally.”

Trump was immediately asked by Wallace about why Black Americans should vote for him. His answer was fine but would have been much better if he had begun by explaining the Charlottesville charge was a lie.

Then came another biased question from Wallace, the white supremacy question. “But are you willing tonight to condemn white supremacists and militia group and to say that they need to stand down and not add to the violence in a number of these cities as we saw in Kenosha and as we’ve seen in Portland?” he asked. This echoed the false charges against Trump in 2016 when people claimed he didn’t disavow David Duke.

Wow, this is Chris Wallace asking Trump the same question in 2016.

Trump’s response was a missed opportunity, “Sure, I’m willing to do that.” Wallace insisted that name a specific group, Proud Boys. So the POTUS said, “The Proud Boys,” Mr. Trump said. “Stand back and stand by.” His answer was interpreted by the MSM as a refusal to bash white supremacy. Trump probably thought he was rebuking them. He has condemned white supremacists often. Trump’s answer was accidentally vague and missed an opportunity was to point out that only five days earlier in Atlanta, he said he wanted to designate Antifa AND the Ku Klux Klan as terrorist organizations.

It was a long sad night.  Neither candidate did a good job and the moderator was awful. Trump tried to interrupt too often, Biden was arrogant and nasty, and Wallace was biased and confrontational.

I doubt highly if any undecided voters were convinced of anything other than to vote against either candidate or supporters of one candidate to support the other. The remaining two presidential debates are October 15th and October 22nd. I hope that President Trump changes his strategy and turns a tie into wins. His reelection may depend on it.

For more on the debate, Go to Hot Air for some great debate posts.

Jazz Shaw did a thorough job of fact-checking Biden with: