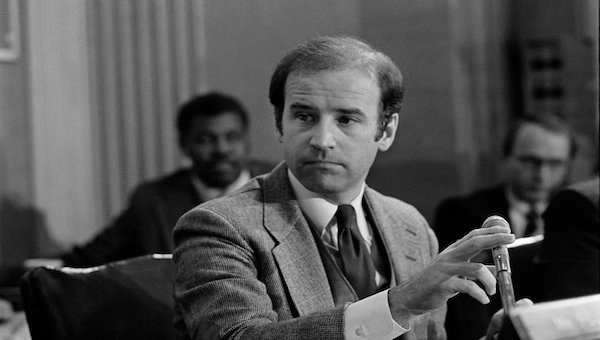 Joe probably doesn’t remember… but we do.

COVID is no longer the singular pressing issue for Americans, the invasion of Ukraine is dragging on, and the autistic shrieking of Republicans as “racist” for passing laws to secure the integrity of elections is on hiatus until closer to the midterms.

It’s about time for a new “current thing” for Dems to rally behind.

As if on cue, the leak of a draft decision from the Supreme Court on Dobbs v. Jackson Women’s Health has been just the ticket for Dems.

Despite what the low-information ghouls waving hangers are shouting in front of the Supreme Court building, this doesn’t mean that abortion will immediately be criminalized in the United States. It means that it will be left up to individual states to pass laws to permit, limit, expand, or restrict abortion access.

Interestingly, the staunch “defenders of democracy” in the Party of Moloch don’t want individual states to make those decisions. They want the one extreme standard of abortion-on-demand past fetal viability imposed in all 50 states.

As Democrats push for Congress to pass a law that would enshrine the imaginary “right” to murder unborn babies, let’s not forget that this dramatic lurch to unfettered access to abortion as “healthcare” is very new. For decades, pro-life views were commonly held on both sides of the aisle.

In 1982, “staunch Catholic” Joe Biden had pushed for pretty much the very thing that the leaked draft SCOTUS decision says — let the states decide.

With an anti-abortion president, Ronald Reagan, in power and Republicans controlling the Senate for the first time in decades, social conservatives pushed for a constitutional amendment to allow individual states to overturn Roe v. Wade, the Supreme Court ruling that had made abortion legal nationwide several years earlier.

The amendment — which the National Abortion Rights Action League called “the most devastating attack yet on abortion rights” — cleared a key hurdle in the Senate Judiciary Committee in March 1982. Support came not only from Republicans but from a 39-year-old, second-term Democrat: Joseph R. Biden Jr.

“I’m probably a victim, or a product, however you want to phrase it, of my background,” Mr. Biden, a Roman Catholic, said at the time. The decision, he said, was “the single most difficult vote I’ve cast as a U.S. senator.”

Biden says that it was “the single most difficult vote” he’s cast as a Senator. That’s not surprising — he’s conflicted with which side to pander to, left-leaning Catholics or the pro-abort extremists that “shout” their abortions.

It has been a giant leap from Hillary’s insistence in the 90s that abortion should be “safe, legal, and rare” to ex-Governor of Virginia Ralph “Blackface” Northam’s comments on infanticide and a push by Democrats in several states for late-term abortion.

The “abortion is a woman’s right” position of leftists has gone to such ghoulish extremes that it’s difficult to imagine that the Justices that decided Roe could have foreseen it — such as the embracing of abortion through all 9 months of pregnancy.

And yet… that’s precisely where we are.

Speaking to press on Capitol steps, Sen. Blumenthal calls for another vote on the Women’s Health Protection Act, which would establish a nationwide right to abortion through all 9 months of pregnancy. https://t.co/QxJFm4SB2g https://t.co/Lkz6NZG3NL pic.twitter.com/4GOF8HLmJt

Even Roe limited abortion to pre-viability, which the court determined to be a rather extreme 24 weeks.

The politicization and polarization surrounding abortion caused by Roe were cited in the leaked SCOTUS document.

In the leaked decision, Justice Alito wrote, “We hold that Roe and Casey must be overruled. The Constitution makes no reference to abortion, and no such right is implicitly protected by any constitutional provision.”

He also wrote that Roe was “egregiously wrong from the start” and that the “reasoning was exceptionally weak” and the decision itself “has had damaging consequences.” He said that the majority holds that the Constitution doesn’t confer the right to an abortion and “Roe and Casey must be overruled.”

“We do not pretend to know how our political system or society will respond to today’s decision overruling Roe and Casey,” wrote Alito, “And even if we could foresee what will happen, we would have no authority to let that knowledge influence our decision. We can only do our job to interpret the law, apply longstanding principles of stare decisis, and decide this case accordingly.”

That sounds like what then-Senator Joe Biden had supported in 1982… until he voted against it the following year.

The bill never made it to the full Senate, and when it came back up the following year, Mr. Biden voted against it. His back-and-forth over abortion would become a hallmark of his political career.

Biden has been trying to “both sides” the abortion issue for his entire political career.

Continuing in this tradition of trying to have it both ways, the “devout Catholic” President said Tuesday that the leaked decision was “quite radical” despite having supported basically the same thing in the 1980s. He then goes on to fearmonger that other contentious social issues that have nothing to do with abortion could be overturned.

Biden is saying this because the Court has more conservative justices than activist ones for the first time in decades, and Libs are ticked about it because they’ve lost their beloved activist branch of government.

Biden also said that he wasn’t prepared to leave the abortion decision “to the whims of the public” at the moment.

Biden: "I'm not prepared to leave” abortion rights “to the whims of the public at the moment."
pic.twitter.com/ZsKBzWq5pI

Yes, you can’t have “we the people” decide on something so contentious as protecting unborn lives.

Biden also said that Roe was consistent with the teaching of mainstream religion.

Biden: "Roe says what all basic, mainstream religions have historically concluded, that the existence of a human life and being is a question: Is it at the moment of conception? Is it six months? Is it six weeks?…The idea…we're going to make a judgment…goes way overboard." pic.twitter.com/Ec0pcBSaCk

This just shows that he doesn’t understand or adhere to Catholic teaching.

Every time Joe Biden tries to weigh in on something weighty, this clip of Justice Clarence Thomas comes to mind:

Joe Biden clearly has no idea what he’s talking about.