What Do I Mourn? 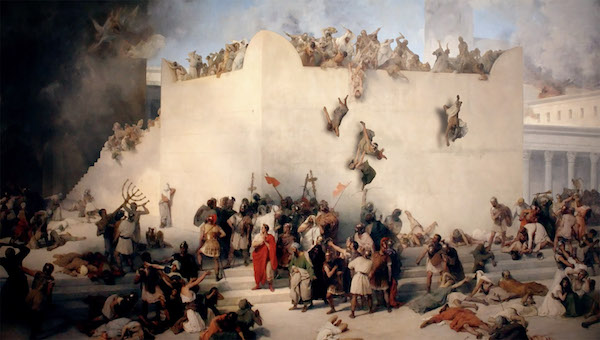 Shivah Asar B’Tammuz (17th of Tammuz) is the beginning of the annual 3-week mourning period for the Jewish People. The fast that begins the Three Weeks commemorates no less than 5 major tragedies in our Jewish history: Moshe’s destruction of the two tablets due to Israel’s idol worship, the inability of Jews to offer animal sacrifices during the Babylonian siege of Jerusalem, idols in our holy Temple, burnings of our holy Torah, and the breaching of the walls of Jerusalem by the Romans, ultimately resulting in the destruction of the two holy Jewish Temples.

The fast day is a day to repent, get close to HaShem, and admit our wrongdoing as a people, asking for forgiveness and acknowledging the actions that have led our people astray and thus contributed to calamity for the Jewish People over the years. I am not blaming all tragedies of the Jewish People on the Jewish People, but, as we know, we play a part in our downfall as a nation. When we behave destructively, we certainly hasten destruction upon ourselves.

I would like to add another tragedy to the abovementioned list. The modern tragedy of Israel/Zionism being separated from Judaism. Israel is a fundamental, foundational, integral part of the Jewish Nation and religion and is thus inalienable. However, in the post-modern world we live in, history revisionism is pervasive and has thus allowed Jews to do the unthinkable – separate Israel from Judaism.

In today’s world, progressive thought seems to allow anyone to identify with/as anything based on the whims of the day. This has caused a truly astounding and horrifying phenomenon: Jews identifying as “Jewish, but not Zionist.” Let’s blow past the concept of self-identification right now, as that is an entirely separate issue of existentialist reality (can someone simply identify as something that they are not and make it so? I assert not, but that is altogether a topic for another time).

Let’s focus on Jews separating themselves from basic Judaism, i.e., the fundament of the Land of Israel. We are dealing with an insidious beast today, one that guises itself as “Anti-Zionism” when it is age-old Antisemitism, and sadly we, the Jews, are contributing to its metastasis.

In the days of old, in biblical times, during the destruction of our Temples, during our exiles, the thought of separating ourselves, our existence, our Nation, or our religion from basic Jewishness was unheard of. If you had told a Jew in Babylon to stop lamenting Jerusalem and to stop pining to return to Israel because “you can be Jewish without being pro-Israel,” the Jew would have simply ignored you and thought you a fool to the highest degree.

During Jewish history, there was never a question as to the connection of Jews to Israel or a question of the import of the Land itself. Though the issues of when we would return, how might we return, or if it is a good idea to return in such a time and manner were relevant, there was never the slightest concept of a Jew without Israel. They were obviously one and the same; thus, even writing this piece feels ridiculous. It is as if I am writing an article about people who identify as parents only on Tuesdays and Wednesdays. For the rest of the week, this sect of people do not identify as parents and thus completely ignore their children. Whether you identify or not, whether you think it popular or not, whatever the conceivable reasons for this train of thought… if you have children, you are a parent every day. There are no two ways about it.

Furthermore, being a parent is not in name only. Parenthood comes with behavioral, emotional, financial, and logical responsibilities. This is the basic fact that one cannot “identify” or “not identify” as a parent. Once something exists (in this case, children), there is no choice of identification. If one has brought children into the world… they have thus become a parent.

So too, we cannot identify as pro-Israel or Zionists or whatever, as being a separate entity from Judaism itself. We are Jews every day of the week, and that means something. The Jewish Nation, Am Yisrael, exists outside our feelings and reveries. Jews, the Nation of Israel, is a fact. Zionism is a foundational part of said existence. Thus, any notion of removing Israel from our Judaism (from our very selves) is not only absurdly impossible but also incoherent.

In these Three Weeks, I mourn that this is even an issue in our world today. I mourn that Jews are creating an unfathomable fracture in our Nation. I mourn that today Jews identify as “culturally Jewish, but not pro-Israel” and the like. I mourn all of that and more.

Let’s thus use this time period for serious reflection and as the impetus for change. Let’s rid ourselves of delusion, incoherence, and self-destructive behaviors. Let’s stop destroying our own Temple. Let’s get back to basics and acknowledge reality as reality. We are Israel, and Israel is us, so let’s ensure that the next Jewish generation knows and acts like it.

Lauren Isaacs is the National Director at Herut Canada Herut is an international movement for Zionist pride and education and is dedicated to the ideals of pre-World War II Zionist leader Ze’ev Jabotinsky. More about Herut can be found at www.HerutNA.org–Please click on this link and consider joining Lauren (and The Lid)  in this great organization.