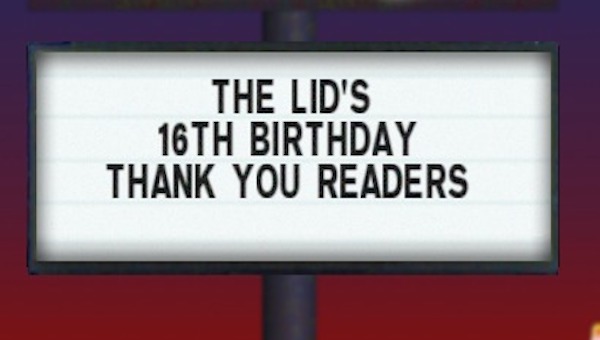 On January 23rd, 2006, this blog opened for business, meanng it is time to celebrate The Lid’s 16th Birthday (that’s 112 in dog years).  My “writing career” began in 2001 with my first contributions to AISH.com. I soon became a regular at AISH and Jewish World Review but became frustrated because the former wouldn’t allow me to be political and the latter would take much too long to review my submissions (a post I submitted in October 2005 is still waiting to be posted).

In 2006 this blog was opened for business. There is no truth to the rumor that I had a full head of hair in 2006. I lost it much earlier when my children were born.

Back then, the site was called Yid With Lid. But eventually, I discovered  Yidwithlid said to potential readers that only articles related to my Jewish faith were posted here. And the content was primarily political. And when Daniel Pipes drilled me a new one about Yidwithlid. He said the title was pejorative and an indication the content wasn’t serious (sometimes my posts are snarky even when serious).

Back then, the blog looked like this, and I was hosted by Google’s Blogspot. Beginning with the first post in 2005, this site’s mission has been to provide an accurate and unique perspective on the news, finding the stories the mainstream media does not cover, or to present it in a different and more accurate way, while adding a bit of culture, faith, and a lot of snark. Everything is written from the standpoint of a politically conservative, observant Jew living in the “Socialist Republic of New York.”

January 2010 saw the name of the site changed to “The Lid,” but to ease the transition, Yidwithlid was kept in the heading as a sub-head: In 2012 Blogspot shut down the site for a day just as I tried to put up a post about Holocaust on Yom HaShoah. They never told me why so I began to look for another provider and someone who know how to design it.

Also that year I began to contribute to Breitbart. There I had the opportunity to learn from the late Andrew Breitbart, but I got to work with some people who became media superstars, Peter Schweizer, and Dana Loesch.

The transformation of the site’s name and look was completed in 2014: Yidwithlid was gone, and  Einstein was retired.

Today’s look was set in September 2015 when the site was moved from Blogspot to WordPress.

Accuracy is most important; therefore, each news fact presented on the site contains links to the original source, report, or video. If a link is unavailable, the post will identify the source. The only exception is news events personally covered by yours truly. Those events are identified in the posts.

Since that first post, some enemies have been made because every word is written to serve the reader, not to serve a popular opinion.

More important though is the long list of close friendships with people I’ve met only through the efforts of creating and building this site. There are too many to name here.  Many others have invested the time to teach me so much, including you, the readers who have taken the time to write letters and/or comments, correct mistakes, or explain why you thought I was wrong.

Whether this is your first time on this site or your 18,132nd time, it is impossible to express my appreciation for the fact that you have taken a part of your busy day to read what is written here.

Okay, enough reminiscing. It’s time to put the sappy stuff aside and write some real posts.

Thanks for visiting and reading