Happy Anniversary America! It’s One Year After 15-Days To Slow The Spread (And A Year Of Democratic Lies And MSM Coverup) 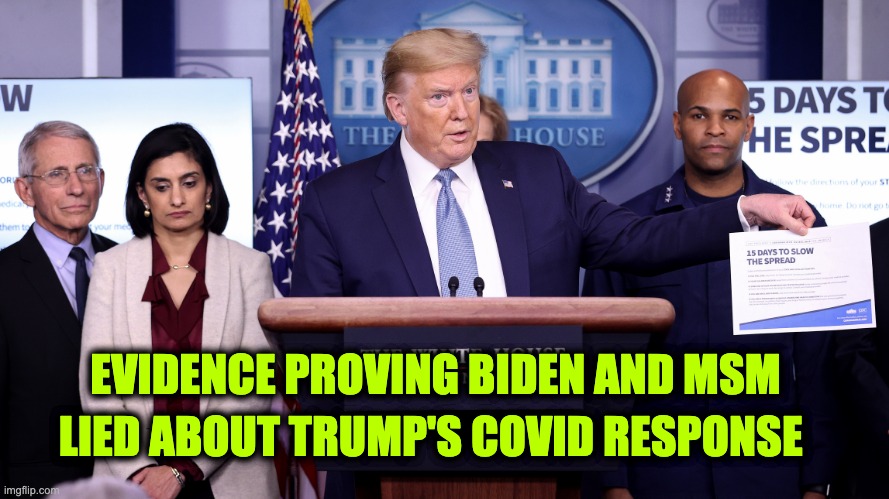 Happy Anniversary! One year ago today, during a March 16, 2020, White House press conference, President Trump, Dr. Fauci, and Dr. Birx announced the 15-Days To Slow The Spread program, which began the shut down of the American economy.

365 days and a few peaks later, COVID-19 is still spreading, albeit at a much slower pace thanks to President Trump’s “Operation Warp Speed,” which so far has produced three vaccines in record time.

The “15 Days” were the latest in a series of Trump administration serious moves attempting to fight the pandemic. Already demonstrated on this site were the specific actions the Trump team took immediate action on the virus during the last nine days of January 2020 and the first two weeks of February and itemized that during the same time period Joe Biden and his team downplayed the seriousness of COVID-19. Not that anyone who followed the MSM would know about Trump’s actions or Biden telling America the ChinaVirus was no big deal. The Democrats and their sycophants in the mainstream media lied about both reactions.

The 15 days were followed by 30 days extending the shutdown to April 30th. Even though Trump knew this would hurt the economic recovery he so deftly produced, he took extreme actions to fight the virus. Some worked like “Operation Warp Speed,” the results of other actions, such as closing down the economy, seem mixed at best.

Despite the actions taken by the Trump Administration,  after ten months of the COVID-19 virus, the Democrats and their sycophants in the mainstream media were able to defeat Donald Trump. Much of their campaign included the lie that the Trump Administration never took the virus seriously and the Joe Biden team was ahead of the curve.  The timeline above and the ones published previously for late January and early February prove America was lied to. Joe Biden and his team are still lying to Americans about Trump and the virus a year after 15-Days To Slow The Spread.