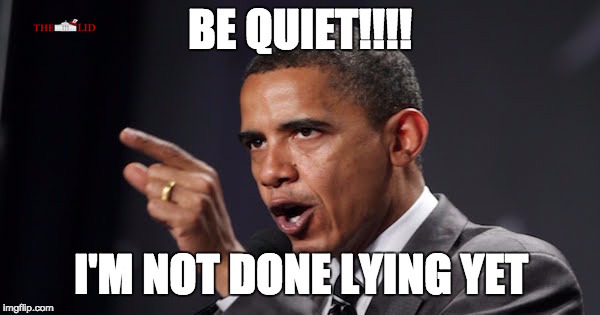 The MSM keep saying that they have to treat Donald Trump differently because they believe so much of what he says is untrue. The Washington Post even published an article called, “Yes, Donald Trump ‘lies.’ A lot. And news organizations should say so.” The article claimed, “that it looks likely he will continue employing the unprecedented levels of dishonesty he wielded to great effect during the campaign.”

Donald Trump, like all candidates, isn’t always truthful and is subject to hyperbole, but what the mainstream media refuses to admit (or even cover) is that  Barack Obama is a bigger liar. In fact, the MSM refused to cover any Obama mistake/lie.

A search of articles on this site for the the term Obama Lies generated 204 pages of post titles. Each page contained about 10 different post titles. Not all of them were about Obama: some were about other people in the Obama Administration who lied, but no one tied the lie back to Obama. The selection was very conservative in blaming the soon to be former president.

Going though each post is a lengthy process — the 122 Obama lies in the chart below represents only 50 of the 204 pages of lies (about 25%).

In other words, the actual number is probably closer to 500 Obama lies.

So why does the mainstream media believe that President Trump’s prevarications are more frequent than other presidents’?

That’s easy. Because every time the media believes that Donald Trump told a whopper, whether their claim is true or not, the entire liberal media establishment jumps on the perceived untruth like vultures on a carcass. But when Barack Obama lies, in most cases there was silence from the liberal media.

So take a look at the 122 lies below, each title is linked to the actual post. And remember, there is a lot more where they came from

The Reason “Russian Bounty On US Troops” Story Was Released, And The Reason It Was Corrected (Video)
April 17th, 2021 Conservative Firing Line